Long, Rev. James (1814-87) a priest of the Church Missionary Society who earned a great reputation in Bengal and England as an orientalist and humanitarian activist. Born in Ireland, James Long spent some part of his early life in Russia. He was unquestionably a unique person among the missionaries who came to Bengal in the nineteenth century. He studied at the Church Missionary Society's Islington College in London, was ordained a deacon in the Church of England in 1839 and a priest in the following year. Long came to calcutta as a priest in 1840. His allotted field was Thakurpukur, a village south of Calcutta, where he operated as a priest for more than thirty years. 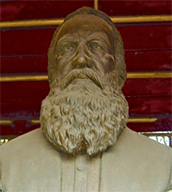 James Long acquired proficiency in several Indian languages including Bangla, Sanskrit and Persian, and soon came to be recognised as an orientalist. His long paper entitled Comparative Philology published in the Journal of the Asiatic Society, Calcutta (1843), aroused strong interest among other philologists of the contemporary world in the study of Indian languages. In his social intercourse with the people of Bengal Long noticed the frequent use of proverbs by the natives and he felt that the proverbs that they used were profound in meaning and highly succinct in expression. He collected proverbs from all parts of Bengal and organised and annotated them systematically.

His Bengali Proverbs (1851) has been recognised as a significant addition to the growing Bangla literature. He devoted the next two decades to further study of Bangla proverbs and Bangla folk literature. In course of his study of Bengal society Long also published A Catalogue of Bengali Newspapers and Periodicals from 1818 to 1855, and Descriptive Catalogue of Vernacular Books and Pamphlets (1865). Dhatumala; Dristantaratna; Jib-rahasya; Prachya Prabachan; Puratan Kalikata; Selections from Unpublished Records of Government, Report on the Native Press of Bengal and Early Bengali Literature and Newspapers are among his noted works.

As a Missionary, Reverend Long realised that the actions of the British indigo planters would impede the progress of proselytisation in rural Bengal. He testified before the indigo commission that people often hurled harsh comments at him, such as: 'Why do you not tell your countrymen, the indigo planters, to be less oppressive; go and preach to them first'.

James Long's close association with rural people led him to believe that the masses, particularly the indigo cultivators, were unjustly and oppressively treated by the British mercantile community and even by the government. His views were entirely in agreement with those of dinabandhu mitra who expressed his sentiments in a drama entitled Nil Darpan published anonymously from Dhaka in 1860. Long rendered the work into English with a prefatory note by himself. The translation, which exposed the nature of the oppression of the indigo planters, offended the establishment so much that a raging propaganda was started by the Anglo-Indian press against the publisher and the translator. A libel suit was instituted against Long and the publisher (CH Manuel and Co) by The Englishman and by some indigo planters. After a summary trial the all-white jury brought in a verdict of guilty against Long and his publisher. He was fined one thousand rupees and sentenced to one month's imprisonment. Kali Prasanna Sinha, an intellectual and landlord paid up the fine at once in the court, but Long had to undergo his term of imprisonment in July 1861. As is attested by the endless rallies, memoranda, sympathy-letters and visits during his confinement and in the wake of his release, Long became an instant hero of the people of Bengal.

He was closely associated with the calcutta school-book society and compiled several texts in Bangla including Questions of Natural History, Life of Mahomed, and Bengali Etymology. He was actively associated with the foundation of the bethune society, Bengal Social Science Association and the asiatic society, Calcutta. Elaborating on his perceptions of Bengal society and his concerns about the impact of British rule on the subjugated people, Long prepared a long report entitled Five Hundred Questions on the Subjects Requiring Investigation in the Social condition of the Natives of Bengal, which was published in the proceedings of several learned organisations in India and Britain including the Bethune Society (1862), Calcutta, and the Royal Asiatic Society of Great Britain (1866). Besides it saw many reprints as an independent paper indicating how he could capture the public imagination in India and Britain as regards misrule of the colonial government.

In 1872 James Long left Calcutta for good and lived for the rest of his life in London. He died on March 23 1887. In all obituaries he was portrayed as an outstanding orientalist and humanist. Before his death Long instituted an endowment called the Long Lectureship on Oriental Religion that is still operative. [Nurul Hossain Choudhury]