Mosquito (masha) a blood sucking insect belonging to the order Diptera, family Culicidae. Important genera are Anopheles, Culex, Aedes, Mansonia, Psorophora, and Haemagogus. They are vectors of many diseases, including malaria, filariasis, yellow fever, dengue, viral encephalitis, and dermatobiasis. The female mosquito has needle-like piercing- sucking type of mouthparts and sucks blood from different vertebrate hosts. A blood meal is essential before laying eggs. Males feed on plant juices. Out of a world total of more than 3000 species only about 113 species are recorded in Bangladesh. 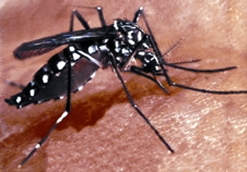 Four Anopheles species namely An. dirus, An. philippinensis, An. minimus, and An. sundaicus are established malaria vectors in Bangladesh. The Ministry of Health claims malarial parasite positivity in four more species An. aconitus, An. vagus, An. annularis, and An. maculatus var willmorei. Bangladesh often experiences two malaria peaks a year one in pre-monsoon (May-June) time, another in post-monsoon (Oct-Nov) time. Among the non-malarial diseases, filariasis is transmitted by Culex quinquefasciatus (bancroftian type), and Mansonia speices (brugian type); Aedes aegypti and Ae. albopictus are suspected to spread Dengue, a viral disease, and a still less known Japanese Encephalitis disease is transmitted by Cx. tritaeniorhynchus.

All four established malaria vectors breed in the countryside and suburbs, and the city malaria transmission is either by imported cases or by the emerging suspected vectors, particularly An. vagus that breeds all over the country. The dengue vectors breed both in artificial and natural containers. Aedes aegypti is an urban species, whereas An. albopictus prefers to breed in the rural conditions. The filariasis vector, Cx. quinquefasciatus is the most versatile species breeding nearly everywhere with a wide biting activity pattern. However, for an unknown reason, filariasis is prevalent more in the nothwestern part of Bangladesh. Cx. quinquefasciatus accounts for nearly 80% of the total bite complain of the country. Mansonia breeds with aquatic plants, while Cx. tritaeniorhynchus prefers to breed in rice fields.

Spraying of adulticides has been replaced by the use of bed nets impregnated with Deltamecron in certain areas of Bangladesh. This has minimised the man-mosquito contact significantly. Organophosphates (Malathion) are used as larvicides by the Government workers, while the city drains are sprayed by malariol or black oil by the municipalities. State sponsored spraying programme is often inadequate or ineffective.

Mosquito experts emphasize more on proper drainage, cleaning marshes and ditches as ways to successful mosquito control in the country. Emptying domestic containers and taking care of natural containers have also been suggested. Local scientists have identified several indigenous animal species as predators on mosquito larvae. While fishes, various aquatic insects, and predatory mosquitoes have shown promising results, indigenous plant products have been found to be lethal to mosquito larvae, and a plant has encouraged workers by its abilities to trap mosquito larvae. These biocontrols have been proposed to be included in the national mosquito control programme. [KM Nurul Huda]