Motijheel Thana (Dhaka metropolitan) area 3.69 sq km, located in between 23°43' and 23°44' north latitudes and in between 90°24' and 90°25' east longitudes. It is bounded by ramna, rampura and khilgaon thanas on the north, sutrapur thana on the south, Khilgaon and sabujbagh thanas on the east, paltan and Ramna thanas on the west.

Administration Motijheel Thana was formed in 1976. 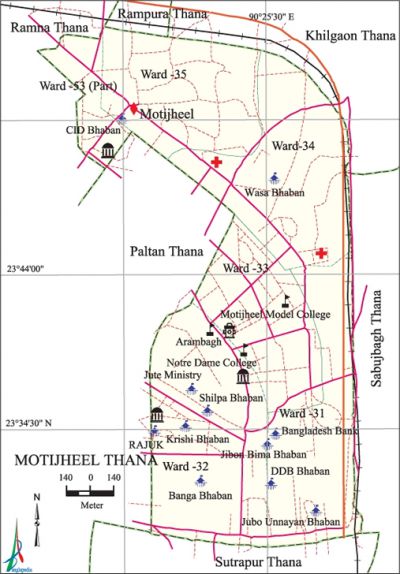 History of the War of Liberation During the war of liberation in 1971 the Pak army conducted extensive mass killing and plunder in the area. The freedom fighters destroyed the power-house of the AGB Colony near Kamalapur Railway Station in middle of July 1971.