Mujibnagar Upazila (meherpur district) area 112.68 sq km, located in between 23°36' and 23°45' north latitudes and in between 88°34' and 88°43' east longitudes. It is bounded by meherpur sadar upazila on the north, damurhuda and Meherpur Sadar upazilas on the east, West Bengal of India on the south and on the west. 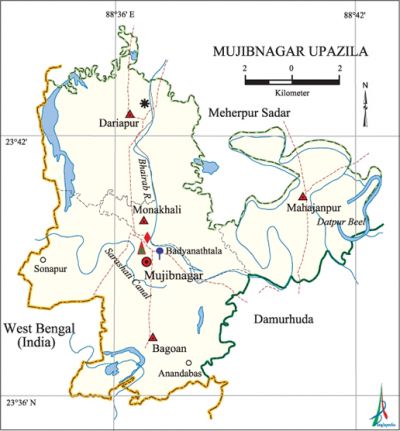 History of the War of Liberation The provisional government of Bangladesh took oath at Badyanathtala on 17 April 1971. Professor mohammad yusuf ali, MNA read out the proclamation of independence. 'Badyanathtala was renamed as Mujibnagar.

Hats, bazars and fairs Hats and bazars are 11, most noted of which are Dariapur Hat, Anandabas Hat, Kedarganj Hat, Gourinagar Hat and Ratanpur Hat.