Administration Damurhuda Thana was turned into an upazila in 1983. 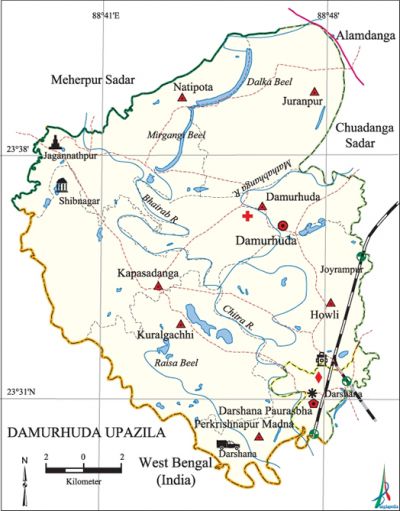 Historical events The INDIGO RESISTANCE MOVEMENTand the peasant movement extensively spread over Damurhuda upazila. The peasants of this region played an important role in the no rent movement in 1869 and 1873. The first peasant conference in Bengal was held in April 1920 in this upazila. During the war of liberation in 1971 the Pak army burned a lot of houses at village Madna of the upazila and killed many innocent people. Eight freedom fighters were killed in an encounter with the Pak army at Natudaha.

Marks of the War of Liberation Memorial monument built in memory of the martyrs on the Darshana-Mujibnagar highway.

Hats, bazars and fairs Hats and bazars are 20, fair 1, most noted of which are Damurhuda Hat and Dugdugir Hat.