Nakshi Kantha embroidered quilt said to be indigenous to Bangladesh. The term nakshi kantha, popularly used in Bangladesh, is found even in medieval literature. The name nakshi kantha became particularly popular among literate people after the publicaton of jasimuddin's poem Naksi Kanthar Math (1929). In west bengal, all kanthas, both plain and embroidered, are referred to as kantha. In East Bengal dialects the kantha is also variously referred to as kheta or kentha. In Bihar and parts of West Bengal, the kantha is also known as sujni. Made from old cloth, discarded saris, dhotis, and lubgis, kanthas range from utilitarian quilts to exquisitely embroidered heirlooms. 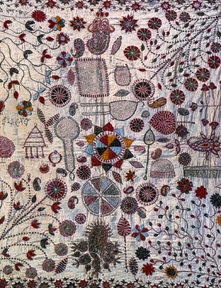 Depending on the thickness required, three to seven saris are layered and quilted with the simple running stitch, which typically produces a rippled effect. Traditionally, thread drawn from coloured sari borders would be used to embroider motifs or border patterns imitative of sari borders. At present, embroidery skeins are used for motifs and border patterns. Yarn used for weaving is also used for kantha embroidery, particularly in the Rajshahi-Chapai Nawabganj area where the quilting is heavy.

Kanthas serve primarily as bed pallets and as light wraps. Small kanthas are used as swaddling clothes for babies. Depending on their size and use, kanthas range from lep kanthas (winter quilts) and sujni kanthas (spreads and coverlets) to one-foot square rumal (handkerchief) kanthas. Other kantha articles include the asan (a spread for sitting), the bastani or gatri (a wrapper for clothes and other valuables), the arshilata (a wrap for mirrors or toilet articles), the dastarkhan (a spread laid out on the floor for placing food items and plates for dining purposes), the gilaf (an envelope-shaped kantha to cover the quran), and the jainamaz (prayer rug).

Kanthas exemplify thrift, as pieces of old cloth are put together to make something new. However, old cloth also has a magical purpose, as it is believed to ward off the evil eye. The kantha made of old cloth is thus supposed to keep its user safe from harm. Kantha motifs, many of them common to the alpana, also have a magical purpose and reflect both the desire of the needlewoman for happiness, prosperity, marriage, and fertility as well as wish-fulfillment.

Despite their variety, most kanthas tend to follow a basic pattern, the focal point being a central lotus motif with concentric circles of undulating vines or sari border patterns. In the four corners of the kantha, or in the four corners of the central square, tree-of-life motifs or kalka are embroidered pointing towards the central lotus motif. The empty spaces between the central and corner motifs are filled with motifs drawn from nature and the homestead or with scenes from real life or legends. Apart from floral motifs, recurrent motifs are the curvilinear swastika, kitchen utensils, ornaments, elephants, tigers, horses, peacocks, boats, palanquins, and the rath, the chariot of jagannath. Scenes from Hindu mythology juxtapose secular scenes of dancing, hunting, and boating. The areas left without motifs or scenes are quilted with the rippling kantha stitch. Other types of kanthas include the pad tola kantha, which is embroidered entirely with sari border patterns, and the lohori or lohira kantha, in which thick yarn is used for close pattern darning. In the most intricate of pad tola kanthas, there is no space between the concentric border patterns so that the entire kantha seems a piece of woven cloth.

While most kanthas are the work of illiterate women, many contain proverbs, blessings, and even captions of motifs and scenes in Bangla lettering. Thus, in one kantha, the kantha maker blesses her son-in-law: Sukhe thako (Be happy). Some kanthas are autographed, either with the names of the women who made them or indicating the relationship the kantha maker bore to the person for whom the kantha was intended. A few kanthas are inscribed with the names of the persons for whom they were made. A kantha in the Gurusaday Museum, Thakurpukur, West Bengal, for example, notes that it was made by Manadasundari for her father with her own hands. Another faridpur kantha, which contains scenes of the krishna legend, has the caption Bastraharan (the garment theft) under a scene of nude women sitting on a tree.

While the utilitarian kantha never ceased to be made, political upheavals, the availability of manufactured articles, and changing tastes led to a decline in richly embroidered kanthas in the early decades of the twentieth century. In recent years the interest in ethnic arts and crafts has encouraged a kantha revival in both Bangladesh and West Bengal. [Niaz Zaman]