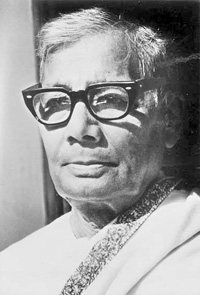 Jasimuddin (1903-1976) poet and litterateur, was born on 1 January 1903 in his maternal uncle’s home at Tambulkhana in Faridpur. His father Ansaruddin Mollah was a teacher at school. Jasimuddin studied for some time at Faridpur Welfare School. He then went to Faridpur Zila School, wherefrom he matriculated in 1921. He completed IA from Rajendra College in 1924, and BA and MA in Bangla from the University of Calcutta in 1929 and 1931 respectively.

From 1931 to 1937, Jasimuddin worked as ramtanu lahiri assistant research fellow under dinesh chandra sen, collecting folk literature. In 1938 he joined the university of dhaka as a lecturer. He left the university in 1944 to join the Department of Information and Broadcasting. He continued working in Broadcasting, first under the Bengal government and then under the East Pakistan Government, until his retirement as Deputy Director in 1962.

Jasimuddin’s talent as a poet developed early. As a college student, he wrote the poem ‘Kabar’ (Grave). The poem, a dramatic monologue of an old man talking to his grandson in front of his wife’s grave, was included in school textbooks while Jasimuddin was still a student at university.

Called ‘Palli Kavi’ (folk poet), Jasimuddin is the poet of rural Bengal, depicting the natural beauty of the rural world as well as the lives and sensibilities of village people. His poetic rhythms are drawn from folk poetry, easy on the ear and quick to put them in memory. He was also a writer of fine prose, fluent, witty, and expressive.

Jasimuddin was one of the pioneers of the progressive and non-communal cultural movement. He was an ardent supporter of socialism and of Bengali nationalism. In the 1950s when the government of Pakistan attempted to stop broadcasting tagore songs, he protested boldly.

In 1969, Jasimuddin was awarded the D.Litt by Rabindra Bharati University. He also won several awards, including the President’s Award for Pride of Performance (1958), Ekushey Padak (1976) and Swadhinata Dibas Puruskar (posthumous, 1978). In 1974 he was also selected for the Bangla Academy Award but he refused to accept it obviously on ground of recognizing his contributions much earlier. Jasimuddin died in Dhaka on 13 March 1976 and was buried in his own village. [Bimal Guha]