Nazrul Academy established in memory of the national poet, kazi nazrul islam, in dhaka. The academy concentrates on Nazrul studies. In 1953 the Bangalis living in Karachi established a Nazrul Institute there. Another institution named 'International Nazrul Forum' was established by Amir Hossain Chowdhury in 1961 with AK Brohi as president and Mizanur Rahman as secretary. In 1964, poet Talim Hossain took an initiative to establish a Nazrul Academy. 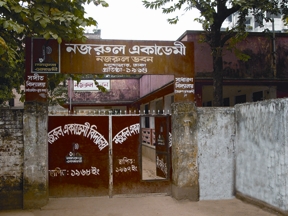 On 24 May, the birth anniversary of Nazrul was celebrated at Nurul Islam’s residence in Rankin Street, under the chairmanship of Justice abu sayeed choudhury (subsequently, President of Bangladesh). A formal proposal to establish a Nazrul Academy was made and an organising committee was formed.On 27 August 1967, at a meeting of the organising committee, the constitution of the academy was framed. Subsequently, an executive committee was elected.

Justice Abdul Moudud and Talim Hossain were elected president and secretary respectively. Khan-E-Sabur was at one time the chief patron of the Academy. In this initiative, the main purpose was to eshtablish Nazrul Islam as an Islamist poet and activist.

On 24 May 1968 at the Engineers' Institute, Dhaka, Kazi Anwarul Haq, Education Minister of Pakistan, formally inaugurated Nazrul Academy. The Chairman of the Academy, Justice Abdul Moudud, presided over the meeting. The Academy was established with three primary objectives: (i) to highlight the role of Nazrul as a modern and progressive ideologies in consistency with the ideology of Pakistan, and (iii) to express' solidarity with Pakistani culture and to develop it through Muslim traditions. Other officially enunciated objectives and programmes included the following:

1. To collect all works of Nazrul and materials related to his life for compilation, research and publication.

2. To collect Nazrul songs and notations for compilation, composition and publication.

4. To translate Nazrul’s works for projection at home and abroad through cultural and other relations.

5. To publish a journal regularly for evaluation of Nazrul’s works and undertake related research, thinking and creative interpretation.

6. To adopt programmes and conduct cultural ceremonies suitable for the development of social and cultural life based on the contribution of Nazrul in particular and on the tradition of literature, art, and culture of the country in general.

7. To establish a printing press for the purpose of printing and publishing books related to the aims      and ideology of the academy.

8. To establish a library, reading rooms, and schools and assembly halls for facilitating study, research, training and cultural activities.

9. To undertake any other programmes supporting the objectives and activities of the academy.

After the official formation of the executive committee in August 1967, a two-storied building, located at 117 Outer Circular Road, was hired for the Academy. It started implementing its programmes with a donation of about rupees fifteen thousand. Khan-e-Sabur, Communication Minister of Pakistan, took the initiative of raising the sum from private individuals and institutions. Within a few months, the government approved an annual grant of rupees twenty-five thousand to the Academy. In May 1968, Nazrul Jayanti (Nazrul's birthday) was observed along with the official inauguration ceremony. Under the auspices of the Academy, a ceremony on the birth anniversary of the poet was held at Darirampur. Principal Ibrahim Khan presided over the function. Under the initiative of the Academy, a hamd-nat jalsha was held at the Engineers' Institute, Dhaka, on 1 July 1968. In addition to Nazrul Jayanti, the Academy observed other national ceremonies including the birth and death anniversaries of rabindranath tagore. The Academy also started to collect songs, and write and publish notations.

After its formal inauguration in 1967, the Academy started two educational institutions: a kindergarten school and a music school All artists who sing Nazrul songs are attached to this music school.

The Academy started publishing a journal, shortly after its inception called Nazrul Academy Patrika. Twelve volumes of the journal were published till 1971. In addition to research papers on Nazrul, the journal also included research articles on national literature and culture. The journal is still being published, though it has become irregular now. The cultural activities of the Academy are now mainly confined to giving music lessons. However, the collection of valuable documents, gramophone records, songs and notations is continuing. Some of these works are published periodically. [Mohammad Abdul Hye]