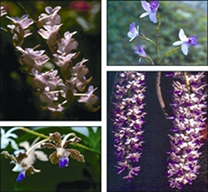 Some different species of orchid

Orchid any of the members of the family Orchidaceae, which contains about 700 genera and 20,000 species, and are distributed throughout the world except in the coldest areas, and are most numerous in the damp equatorial regions. The orchid has the highest number of hybrids, about 80,000. Morphologically, it is striking for its perennial herbaceous nature, whether epiphytic or terrestrial, but is also sometimes lithophytic and saprophytic.

The epiphytic group mostly occurs in tropical and subtropical regions, and the terrestrial group in the temperate regions. The twisted character having a colourful perianth with a showy lip is the most attractive feature of the orchid flower. Each plant bears a small number of matured fruits. Each fruit bears very small seeds, which may range from a few thousands to a few millions.

It is estimated that about 200 species of orchids grow naturally in Bangladesh, of which Dendrobium, Bulbophyllum, Eulophia, Aeredis, Luisa and Vanda are the dominant groups. A few species of ground orchids also grow in the country. Notable one, Arundina graminifolia grow in the Chittagong hill districts. Although the flowers can be seen throughout the year, January to July is the main season of flowering with a climax in March and April. Some of the native plants that may be considered for commercial exploitation are: Dendrobium formosum, D. fimbriatum, D. primulinum, D. crepidatum, D. aphyllum, D. parishi, Vanda teres, Rhyncostylis spp, Aeredis odoratum, Phaelonopsis cornu-cervi and Camarotis purpurea.

Several commercial floriculturists and plant nurseries are now collecting and marketing indigenous orchids along with the exotic ones. Some epiphytic orchids are considered threatened due to large-scale destruction of their natural habitat and indiscriminate collection of orchids. The threatened orchids are Diploprora championii, Aeredis sauvissianum, Bulbophyllum neilgherensis, Phaelonopsis cornu-cervi and Kingidium taenialis. The orchidarium at the botanical garden of Chittagong University is the largest centre of native orchid germplasm collection in the country. [Mostafa Kamal Pasha]