Pankho, The a tribe of chittagong hill tracts is considered a sub-branch of the Mongoloid race. In language and social lifestyle they have a lot of similarities with another tribe called Banajogi. Pankhos are short in height, have brown complexion, flat nose and small eyes. They live in the bandarban district of Chittagong Hills Tracts, but their ancestor's home was probably in Burma (Myanmar). Having been driven out from there for various reasons several hundred years ago, they settled in this region.

Pankhos claim to be Buddhists. But like many other aborigine people, they worship nature. The name of their Creator is Patyen, who resembles Puthian, the Creator of lusheis. There are many myths in the Pankho society about creation of the Universe. After the Creator, Patyen, the next most important god they worship is called Khojing, the Lord of the forest, who controls jhum farming. Consequently, most puja offerings and rites of austerity are dedicated to him. 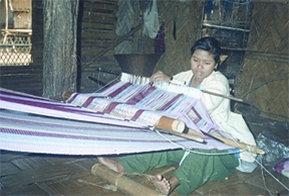 Tiger, the pet animal of Khojing, has a high place in the eyes of Pankhos. The tradition of holding a dancing ceremony at the beginning of Baisakh (April-May), the first month of the year is dedicated to Khojing. Pankhos believe that Khojing's place is in the deep forest. The main Khojing puja is held in the month of Sravana (July- August). Khojing puja is considered the biggest festival of the Pankho community.

Pankhos and Banajogis are farmers. The jhum system of farming is still widely practised by them. Pankhos produce rice and other crops. But they also do the work of procuring timber by felling trees in the forest. In all these works women take part equally with men. Women also do the marketing. Like Burmese and Assamese tribal women, Pankho women are hardworking and enjoy a special place in the family.

Rice is the staple food of Pankhos and wine is their main drink. Meat is their favourite dish. Although they eat the meat of goat, pig, dog, wild bull, wild fowl etc., the flesh of tiger or chitah is forbidden for them.

In the Pankho community, the father is the head of a family. After the father's death, his sons inherit his property and riches. The Pankho people are divided into two clans: Pankho and Bhanjang. Pankhos allow marriage between persons of different clans. After attainment of maturity young men and women are married with their parents' consent. The rules and rites of marriage are very similar to those of Kukis and Lusheis. Pankhos do not practise child marriage. Divorce and remarriage of widows are allowed. The dress of Pankhos and Banajogis is very simple. Men wear a piece of cloth similar to the dhuti. Women wear a dress called pirhan, which is similar to the dress of chakma women. A separate piece of cloth is tied on the upper part of the body. These clothes are all woven at home.

Pankhos have their own language, which is only spoken. The same is true about Banajogis also. There is much similarity between the spoken languages of the two tribes. There is no written form of their tongues. Nevertheless, there is no dearth of songs in their languages, especially love songs.

The unique culture of Pankhos and Banajogis has developed through a combination of their religious beliefs, social customs and ceremonies, pujas and festivals. Dance and songs have nourished their culture. They are accustomed to bamboo dance, flower dance and some other special kinds of dances and songs.