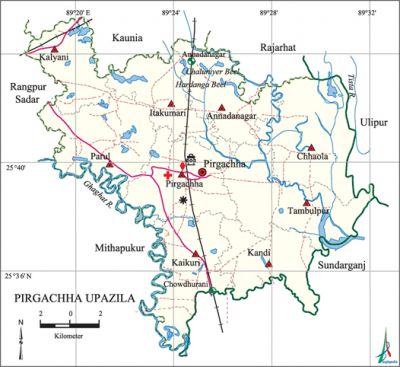 Historical events Once Pirgachha (Manthana) constituted a zamindari estate of Fatehpur Pargana under the kingdom of Kuchbihar. Ananta Ram, a Koch official, surrendered to the Mughals when the latter invaded this region sometime between 1704 and 1714 and received this zamindari which lasted until 1950. fakir-sannyasi resistance were held in this region during the period from 1760 to 1800. On 13 April 1971 the Pak army brutally killed 11 members of the Bangali EPR at Nandiganj. The local people buried them on the Rangpur Kurigram road side. An encounter was held between the freedom fighters and Pak army on 2 December at Monurchhara under Parul union in which one freedom fighter was killed and two Pak soldiers were wounded.

Marks of the War of Liberation Mass killing site 1 (besides the Rangpur Kurigram road).

Sources of drinking water Tube-well 93.44%, tap 0.09%, pond 0.15% and others 6.32%. The presence of arsenic has been detected in the water of 70 shallow tube wells out of 798. The level of arsenic is 25% in the tube well water of Annadanagar, Chhaola, Itakumari, Kandi, Tambulpur and Pirgachha unions.

Natural disasters The devastating earthquake of 1897 and the repeated floods in the region changed the course of the rivers, including the Tista of the region.