Plough an indigenous device used for tilling the soil and preparing it for cultivation. A plough has been a crucially important implement for traditional agricultural production. It is drawn normally by two drought cows, sometimes by man under extreme circumstances. As a technology plough replaced its precursor jhum or slash and burn technique, the remnant of which is still there in some parts of chittagong hill tracts. 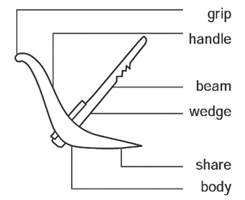 Parts of a typical country plough

There are some extant Terracotta plates indicating the existence of plough technology in Bengal as early as seventh century AD. But certainly it came into practice much earlier. The modern plough with share must be of iron-age affair. Before the use of iron share, plough was all wood and less efficient.

Plough has six parts, such as, grip, handle, beam, body, share, and wedge. As the plough is drawn forward, the narrow sharp share penetrates into the topsoil and breaks it. While breaking, the plough throws the soil on both sides. The number of ploughing necessary for preparing the land for seedling or sowing depends on the type of soil. Hard soil takes longer and greater drought power. The life of a plough is 2-3 years with occasional repairing. Depending on structure Bangladesh soil may be divided into 18 types. Each type is characterized by its own style of ploughs. The style is influenced not only by the soil quality but also by tradition.

Error creating thumbnail: Unable to save thumbnail to destination
Ploughs used at different locations of Bangladesh

Ploughpan A dense and firm soil layer occurring at the base of the cultivated layer. In most soils, including those in Bangladesh, the dense layer is formed as a result of pressure applied by the sole of the plough when the soil is ploughed in moist or wet conditions. In Bangladesh about 3-5 cm firm ploughpan is found developed to some degree in almost all ploughed soils due to cultivation of transplanted rice year after year with country ploughs. The ploughpan poses two main problems for cultivation. Firstly, the firm ploughpan restricts the proliferation of roots and utilization of sub-soil nutrients by growing crops. Secondly, the ploughpan impedes water movement into the sub-soil. When irrigated, or when heavy rainfall occurs, the topsoil is likely to be saturated, because of the ploughpan and may damage or destroy sensitive dryland crops. Ploughpan formation have been mostly recorded in tista, ganges, brahmaputra, meghna, and Barind areas. [Sultana Razia]