Pottery appeared in Bengal, in all probability, in or around 1500 BC. In an alluvial country like Bengal, fine clay is a distinctive geological feature. The ancient inhabitants of the region exploited this natural resource for making numerous potteries. Archaeological sites, such as pandu rajar dhibi, mahisdal, Bharatpur, Mangalkot, chandraketugarh, tamralipti, rajbadidanga, Harinarayanpur and Bangarh of West Bengal and mahasthangarh, govinda bhita, bhasu vihara, wari-bateshwar, Raja Harish Chandrer Badi, mainamati and paharpur of Bangladesh have produced varieties potsherds/potteries, namely Black-and-Red Ware, Northern Black Polished Ware, Rouletted Ware, Amphorae, Black-slipped Ware, Knobbed Ware etc. While the potteries from the Chalcolithic and the early historic sites have diagnostic characteristics, the early medieval, medieval and late medieval potteries do not; since in later period metal and other utensils replaced traditional potteries used as utensils and for everyday religious and other household purposes. The main types of potteries are described below:

Black and Red Ware is a vessel type with distinct diagnostic features: black in the interior and the exterior top, and red on the exterior. These pots are manufactured by inverted firing technique, though double firing has also been suggested as a technique of manufacture. They are turned on the wheel except a few handmade specimens which come from the earliest level of Pandu Rajar Dhibi. The fabric is medium, though a coarse variety occurs in the early and degenerate phases. The clay is indifferently levigated and tempered with fine sand. In most pots a slip is applied on both sides but vases are treated with slip on the exterior and up to the neck on the interior. Some sherds have achieved a smooth and shining surface due to burnishing. Firing under different conditions has given a few pots a completely black interior and red exterior, while others are partly black and partly red on both sides; the later occur in larger frequency. Some pots are painted on the inner side. The channel-spouted bowl is occasionally stained with red ochre towards the end of the spouts. Graffiti is extremely rare. The common shapes are the medium-sized vase, of which the tulip-shaped flower pot types are distinctive; the other shapes are bowl, channel-spouted bowl, basin, jar, dish-on-stand and vase-stand. 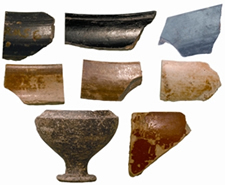 Potteries are to be found practically all over India and in different period eg from Neolithic to post-NBPW culture. Seventy-seven sites have been discovered in West Bengal alone. The chronology in terms of absolute dating and stratigraphy suggest that the Black-and-red ware in West Bengal flourished in circa 1500 BC and continued to evolve till the Chalcolithic culture merged into the historical period dating from circa 3rd century BC.

Northern Black Polished Ware (NBPW) usually has a fine and thin fabric. It is made of well-levigated clay with little tempering material and has a strikingly lustrous surface. The core of the pots varies in colour from blackish to grey; but in some cases reddish varieties have also been noticed. Although the surface colour of 90% of NBPW is jet black and brownish black, the remaining 10% are steel blue, pinkish, silvery, golden, brown, chocolate, violet and deep red. NBPW can be found in monochrome. There are also some examples of bichrome NBPW.

The bichrome variety shares all the features of the monochrome group, except that it shows a combination of two colours; these can be dark steel blue and deep red, grey and light red, black and dark brown, black and brown, black and pale red, and black and ash grey. The ceramic is mostly without any decoration but sometimes painted designs can be found.

The shapes in the NBPW are mostly represented by: (1) dishes with inverted or straight sides; (2) bowls with straight, convex, corrugated or tapering sides; (3) lids with flat terminal; and (4) sharply carinated handis (pots). Other shapes that have been reported are bottle-necked jars, knobbed lids, saucers, small vases with varying rim forms and conspicuous necks, spouted jars, and surahi. NBPW does not have any large and heavy forms such as storage jars or globular pots.

NBPW was highly valued, deluxe ware, perhaps meant for the elite, a possibility indicated by its limited quantity and by specimens where fragments have been repaired with copper rivets, fillets or pins. This suggests that NBPW vessels with minor breakage were not usually thrown away after they had been damaged but were used after repairing, since the repair-cost would have been less than the cost of getting a new vessel.

Technologically, NBPW is among the best pottery produced not only in ancient India and South Asia, but also, one of the best in the entire Old World. Turned on a fast wheel, it was fired in a sagger-kiln at high to very high temperatures and cooled in a reduced atmosphere. The core of the ware, however, varied in colour. This colour variation was due to the potters' inability to control temperatures; nor were they able to ascertain the actual amount of iron present in the clay. Some scholars believe that the black gloss of NBPW may have resulted due to some sort of post-firing technique in which the kiln-hot pottery was coated with some organic liquid. Chemical reports suggest that the black glaze was achieved because of a certain chemical property applied over the black-slipped surface of the pottery. It must be said, however, that in spite of various scientific analyses the production processes of NBPW are yet not clearly known.

NBPW occurs in a larger area than any other known ceramics in India, an area even larger than that of the Harappan potteries. This wide distribution has been variously ascribed to the spread of Mauryan imperialism, Buddhism, or to trade routes. The early phase of NBPW spans from circa 700/600 BC to 400/300 BC and the late phase from circa 400/300 BC to 100 BC or even to the beginning of the Christian era in the Indian Subcontinent. In Bengal, scientific dates are not available; however the tentative time bracket for NBPW is circa 400 BC to first century AD. Prominent NBPW producing sites were Mangalkot, Chandraketugarh, Bangarh, Mahasthan and Wari-i-Bateshwar.

Black-slipped Ware has a basic resemblance with NBPW but lacks its gloss. A smooth black slip is uniformly applied on the surface, giving a fairly shiny appearance but minus the lustre of NBPW. This type of ware is found with the Painted Grey Ware, Black and Red Ware and NBPW level in the Indian Subcontinent context. Numerous Black-slipped Ware has been found in Mahasthan, Wari-Bateshwar, Bangarh and other sites in NBPW level.

Bowls of different types are the most common type of black-slipped ware found; among other shapes, dish, jar, vase and miniature vessel have been discovered. Spouted Jar and dish on stand and bowl on stand are also common in this ware type. The ware has a fine quality though pots in impure clay and with gritty core, ill-fired and turned on a slow wheel, are also present. Generally, the ware has a fine to medium fabric and is turned on a fast wheel. The core is grey. Instances of burnishing are also noticeable. The black pigment is composed of magnetite. The black slip was produced by the application of liquid clay containing finely ground red ochre, which gave it a burnished look, baked in a low temperature.

The discovery of Rouletted Ware is proof of the participation of Mahasthan, Wari-Bateshwar, Tamralipti and Chandraketugarh in particular and Bengal in general, in the growing trade network of the early historic period, which connected many other urban centres in South India and Southeast Asia.

Rouletted Ware is a dish with thick incurved rim, contiguous body and base, and without any foot. It has a smooth lustrous surface, exhibiting a variety of colour and indented concentric circular decoration on the interior surface of the base. The pattern consists of one to three bands of concentric circles, each band containing three to ten rows of closely placed indentations that look like tiny dots, strokes, wedges, triangles or other shapes. The pottery is essentially fine ware but there are also a few coarse varieties. The uniformity of shapes suggests that it was wheel-turned.

Rouletted Ware is named after its decoration, which, no doubt, is its most distinctive feature. The patterns are produced by the continuous rolling motion of roulette when held against a revolving clay vessel, and typically are arranged in narrow bands consisting of one or more rows of evenly or closely spaced small indented marks. A comparison of the stylistic attributes of Rouletted ware with the ones found in the classical Roman world suggests that Arikamedu Rouletted Ware was imported from the Mediterranean region and date to 1st to 2nd century AD. The better examples of Rouletted Ware from Arikamedu were doubtless imported but cruder varieties could be local imitations. The Rouletted Ware of Arikamedu was probably produced locally, but the technique of 'rouletting' seems to have been introduced from the Mediterranean region, since it was not known in South India at that time. The Rouletted Ware of Arikamedu has been dated to 2nd - 1st century BC.

Glazed Ware Potsherds with blue, green, chocolate and other colour-glaze have been found in different sites. A sherd of turquoise blue glaze found in Mahasthangarh has been assigned to the pre-Medieval period but might have come from the Persian Gulf region. West Asian and Chinese origin Glazed Ware also appear in Bengal later periods when they were known as Islamic glazed ceramics.

Knobbed Ware has been found in the early historic context in Bengal and other sites in the subcontinent and Southeast Asia. It has a distinct knob in the centre that is surrounded by incised circles of 7 to 10. The precise function of the Knobbed Ware is not known. These containers, whether of bronze, stone or pottery were not in use for every day cooking, or as food-serving or display vessels, but they did serve special purposes such as ritual and funerary use. The knobbed vessels may be seen as a Mandala, a schematic cosmological symbol representing perhaps Mount Meru and the surrounding oceans.

Amphora are flask-like jars, most of them with rectilinear and high-shouldered double handles, high straight shoulders and tapering or conical bottoms, used for storing oil or wine in the Mediterranean/ Roman world. A complete amphora specimen from Karanji on Bengal-Orissa boarder is very significant because it helps us understand the early historic trade network of Bengal with the Mediterranean region.

Common pottery Potsherds, rather than Black and Red Ware, Northern Black Polished Ware, Black-slipped Ware and Rouletted Ware, scattered over archaeological sites in Bengal have been termed as common pottery in a broad sense for the convenience of description of ceramic finds. However, in the absence of a specific ceramic index it is not possible to give specific names to these pottery types.

However, Dull Red Ware and Grey Ware are common in the assemblage. The fabrics of the wares are coarse to medium in texture. The ceramics are wheel made as well as hand made. In most cases, the clay is not well levigated; and husk has been used as temper. The majority of the potsherds is devoid of slip or wash. Painting is rare and graffiti marks are absent. Some potsherds are decorated with incised and stamped designs. However, mat and basket designs have been commonly noticed.

Earthenware is still in use throughout rural Bengal. There are kumarpada or Palpada in many a village of Bengal. Both the term kumar and pal denote people who are potters by profession and pada denotes a locality. Besides pots and jars for everyday use, ceremonial pots such as Raserhadi, Shakherhadi, Dharmaghat, Shitalghat, Nagghat, Manasaghat, Muharramghat, Gazighat, Mangalghat, Laksmisada bear testimony to the ancient potters' art of Bengal.

Introduction of metal and plastic goods in recent years has been pushing earthen pottery to almost extinction. Potters are now making efforts to keep the art alive by introducing novel ideas and newer methods. Pottery these days is seen more as objects of interior decoration rather than of household necessity. The traditional art of pottery is now finding a new life and status. [SS Mostafizur Rahman]