Rajshahi College was established in 1873 with the financial assistance of Raja Haralal Roy Bahadur of Dubalhati. He donated land for the establishment of the college. Within a short period after establishment, the college became one of the main centres of higher education for the inhabitants of East Bengal, North Bengal, Bihar, Purnia and Assam. The FA (First Arts) classes of the college started on 1 April 1873 with only six boys. At the beginning, solely male students got admission in the college. The number of students reached about 1000 in 1930 and in the next year, the college started admitting female students.

In 1970, the college had 1,840 students, including 300 female students. The college vastly expanded since independence. In 1990, the total number of students was 4,732, including 1,352 girls. The enrolment increased to about 25000 in 2010 and the total number of teachers was 198. The first principal of the college was Haragobinda Sen, who was the Headmaster of Rajshahi Zila School. He served the college for five years (1873-1878). Of the first batch of students' appeared in the FA examinations in 1875 only two students came out successfully. The government wanted to abolish the college but had to abandon the idea due to the strong stand of the Rajshahi Association, which rather pressed for transforming it into an upgraded college by introducing BA courses. The founder president of Rajshahi Association Raja Promothnath Roy Bahadur of Dhigapathia gave Rs 150,000 to the government through the Rajshahi Association for introducing Degree programme in the college. The college got affiliation for the Degree programme in October 1877 and introduced BA courses in 1878. F T Dowding joined as principal of the college in 1879. 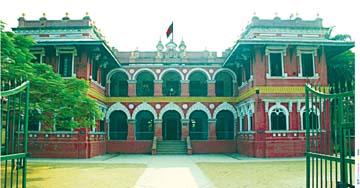 The first building of the college (now serving as the administrative building) was constructed in 1884. PN Hostel, the college's first hostel, was established by the Rajshahi Association in 1894. Roy Bahadur Kumudinikanta Bandhopadhyay was principal of the college in two terms (1897-1919, 1920-1924) and he contributed a lot for the development of the college. In 1902, Hemantakumari Hostel was built with the financial grant from the' Moharani of Puthia, Hemantakumari.

In 1905, the Moharani Hemantakumari Sanskrit College was established under the administration of Rajshahi College to provide sanskrit education without tuition fee. Raja Krishnananda Hall, auditorium of the college was built in 1910 with the financial assistance of Kumar Sharadindu Ray of Balihar. In 1915, the college authority constructed the Physics building at a cost of Rs 57,145. At the initiative of the Rajshahi Association and by the efforts of the Principal Kumudinikanta a total of six hostels were built: five at a total cost of Rs 3,53,836 in 1922 and a two-storeyed one at a cost of Rs 78,000 in 1923. About 960 students get accommodation facilities in those hostels. The new Arts building was constructed in 1925-26 at a cost of Rs 86,809. In 1927, a residential house for the Principal was built on the bank of the river padma to the south of the college. Gradually, other buildings were constructed on approximately 35 acres of land.

In 1884, the Rajshahi Madrasah building was built in the college premises. The madrasah was shifted elsewhere in 1930, and in the same year, the Fuller Hostel, built in 1909, was handed over to the college. The Basantakumar Agricultural Institute was established in 1936 under the Rajshahi College administration with the financial assistance of Basantakumar Roy of Dhigapathia. The institute was closed down in 1952 and its building became a hostel of the college.

The college got affiliation for MA courses in 1881 and in Bachelor of Law courses in 1883 from the Calcutta University. Within a few years, eight students earned their MAs and sixty students got their BL degrees from the Rajshahi College. In 1909, MA and BL courses were suspended.

In East Pakistan, the college was first affiliated to the university of dhaka and later, to the university of rajshahi which was established in 1953. Courses in I Com, B Com (Pass) and BL (Honours) programmes were introduced in the college in 1952, 1954 and 1961 respectively. In 1994, Masters courses were re-introduced under affiliation with the national university. The college closed down the higher secondary courses in 1996.

At present, the college offers 19 Honours courses and 21 Masters courses. The college library is rich with many rare books, gazettes, encyclopaedias, manuscripts, ancient puthi manuscripts, newspapers and periodicals. The library has a total of 69,439 books. There is an auditorium in the first floor of the library. The college organised different festivals in there.

The college has a health centre. It also has one gymnasium, one playground, 3 buses, one botanical garden, one mosque and one pond. There is a teacher's club, a foreign language-training centre and a Shaheed Minar. The college authority organizes football, hockey, cricket, and lawn tennis tournament every year. The students and teachers of the college played an active role during the language movement and the war of liberation in 1952 and 1971 respectively' [ARM Abdul Mazid]