Administration Raozan Thana was formed in 1947 and it was turned into an upazila in 1984. 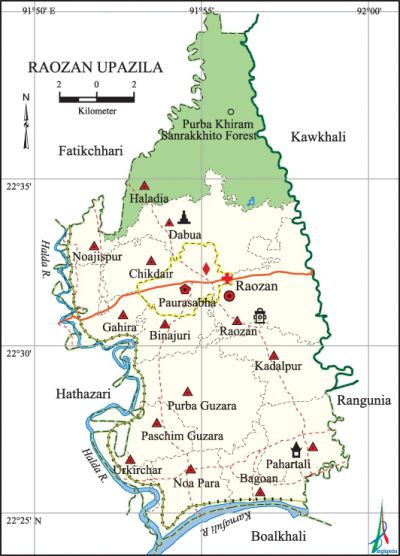 History of the War of Liberation On 13 April 1971 the Pak army killed 48 innocent people at village Unsattarpara; they also conducted heavy plundering and set many houses of this village on fire. On the same day, Saifuddin Khalid Chowdhury, Professor Dilip Kumar Chowdhury, Sheikh Muzzafar Ahmed, Abdur Rab and Younus were killed in a direct encounter with the Pak army at a place in front of the Chittagong Engineering College (presently CUET). In honour of the martyrs a memorial plaque has been installed at this spot. On 23 April the Pak army and the razakars brutally killed Principal Natun Chandra Singh in the premises of his Kundeswari Aushadhalaya. Besides, the Pak army indiscriminately shot 35 persons dead at Jagatmalla Para, Ward no. 4 of Raozan Paurasabha.