Roy, Raja Rammohun (1772/74-1833) the great reformer, was born in a conservative Brahmin family in the village Radhanagar, West Bengal. He received the traditional education that was common in 18th century India. During his boyhood and early youth he had acquired remarkable proficiency in several oriental languages such as Sanskrit, Arabic, Persian, besides Hindi and his mother tongue Bangla. 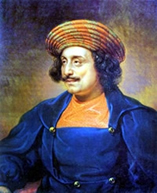 He became well versed in Hindu religious scriptures and through his close contact with Muslim scholars and officials of the revenue and judicial departments of the east india company’s government gained considerable knowledge of Islamic theology and jurisprudence. It may be noted that until 1837 the East India Company’s Government as the language of official business in revenue and judicial transactions retained Persian.

Rammohun was also acquainted with the rudiments of ancient Greek philosophy and science such as Aristotle's Logic and Euclid's Principles which he had learnt through Arabic medium and had imbibed a somewhat critical and rational outlook. A comparative study of Islamic and Hindu theological scriptures and acquaintance with the works of the sufi mystic poets of Persia, together with a knowledge of Aristotelian logic, had enabled him at an early age to develop a somewhat revolutionary approach towards the traditional religions.

Rammohun's early works were written in Arabic and Persian. His first treatise entitled Manazaratul Adyan was devoted to discourses on various religions. This was never printed. Rammohun merely mentions it in his Tuhfat-ul-Muwahhiddin (A Gift to Monotheists), a tract written in Persian with Arabic title and preface. It was published in 1803-04 at Murshidabad where he was living at that time. In this remarkable work Rammohun boldly asserted that 'falsehood was common to all religions without distinction' and maintained that realisation of One Universal Supreme Being could be attained by individuals through their own innate faculty without the aid of any prophet, religious authority and revelation. In fact, several years before the publication of the Tuhfat, Rammohun had renounced the traditional Hindu worship of idols and was often critical of the age-old Hindu customs and rituals.

At an early age Rammohun had come to acquire independent property of his own and was engaged in business enterprise. His economic independence was conducive to achieve intellectual emancipation. Rammohun had gained acquaintance with the leading Indian scholars of the day who were associated with the fort william college and the Sadar Diwani Adalat in Calcutta. He came in close contact with European officials and merchants, many of whom had liberal and radical views associated with the French Revolution. Rammohun had already learnt English, and through his contact with English friends had become acquainted with contemporary European thought.

By the middle of 1814 Rammohun settled down in Calcutta and a new phase of his career began. He had now decided to devote his life to the cause of social and religious reform. Within a year of his arrival in Calcutta, Rammohun established the 'Atmiya Sabha' (Society of Friends), a private association of like-minded individuals. Its members met regularly at his residence to discuss religious and social problems of the day. Soon Rammohun was able to gather around him a small but influential circle of friends, both Indian and European. Among his close Indian friends were dwarkanath tagore and Prasanna Kumar Tagore, two leading and wealthy zamindars who had close commercial links with European traders. Although they did not fully share Rammohun's radical views on religion, they wholeheartedly supported him in all his endeavours for promoting social reforms and Western education.

Rammohun Roy inaugurated the great age of Hindu reform. The public opinion, which he was able to arouse against the evil practice of satee, influenced the government to abolish it in 1829 through a special legislation. Rammohun also strongly denounced idolatry and believed that Hinduism enjoined worship of one universal God. In August 1828 Rammohun founded the 'brahma sabha' (later 'brahma samaj) or Society of God, which in fact emerged as a new sect of Hinduism. Rammohun's religious views, though original, were to some extent influenced by Islam and Christianity. Rammohun brought out a Bangla newspaper, Sambad Kaumudi in 1821 and a Persian newspaper, Mirat-ul-Akhbar in 1822 to propagate his reformist and liberal views.

Rammohun also contributed much to the growth of national consciousness in the subcontinent. In his political views he was greatly influenced by the philosophy of Jeremy Bentham. Rammohun and other Bengali leaders who followed him were loyal supporters of the British raj. They believed that in course of time the political privileges that the British people at home were enjoying would be extended to the people of the British territories overseas. They, however, strongly resented the various kinds of discriminatory practices by the British government towards the Indians. Thus when the Governor General John Adam imposed restrictions on the Indian Press in 1823, Rammohun and his friends strongly protested by submitting a memorial to the Privy Council. The memorial was rejected on the ground that a free press could not exist in a country that did not enjoy political freedom. Again, at the initiative of Rammohun Roy and his friend Dwarkanath Tagore, a signed petition on behalf of the Hindu and Muslim citizens of Calcutta was sent to the British Parliament protesting against certain discriminatory clauses of the Indian Jury Act of 1826.

Rammohun and his friends submitted another petition on behalf of the zamindars of Bengal, Bihar and Orissa to the Governor General Lord william bentinck in 1829 protesting against the revenue policy of the Government that adversely affected their interests. In these public protests against the policies of an alien government, organised chiefly by Rammohun Roy, could be discerned the early manifestations of national consciousness. Rammohun watched with enthusiasm the progress of the reform movement in England and the liberal and nationalist revolutions in Europe. He confidently believed that 'enemies to liberty and friends of despotism have never been and never will be successful', as was revealed in his letter of 11 August 1822 to James Silk Buckingham.

In 1830 Rammohun Roy left for England to represent to the British king and parliament the grievances of the titular Mughal Emperor Akbar II (1806-1837), who had invested him with the title of 'Raja'. In England he was widely acclaimed by leaders of British society. He also visited France in 1832. In 1833 while visiting Bristol he fell ill and died on 27 September. [AF Salahuddin Ahmed]