Shahbagh Thana (Dhaka metropolitan) area 3.49 sq km, located in between 23°43' and 23°44' north latitudes and in between 90°23' and 90°24' east longitudes. It is bounded by ramna thana on the north, chawkbazar model and bangshal thanas on the south, paltan thana on the east, kalabagan, new market and lalbagh thanas on the west. 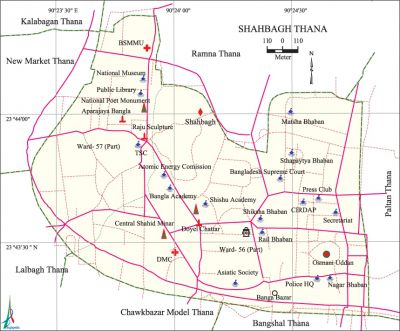 Historical events On 21 February 1952, during the language movement, police shot a number of students dead in the Dhaka University and Dhaka Medical College Hospital areas. The students of Dhaka University played main role during the mass upsurge of 1969. bangabandhu sheikh mujibur rahman was awarded the title of 'Bangabandhu' at the Ramna Race Course (present Suhrawardy Uydan) in a public reception. The flag of Bangladesh was hoisted for the first time on 2 March 1971 at the Bat-tala of Dhaka University. On seventh March 1971, Bangabandhu Sheikh Mujibur Rahman delivered his historic seventhMarch Address at the Ramna Race Course. On 25 March 1971 the Pak army brutally killed a number of teachers in the residential area of Dhaka University. Between 25 and 27 March the Pak army killed about more than five hundred students and staff of the University. They also destroyed many religious establishments of the thana. On 16 December 1971, the Pak army surrendered to the Combined Forces and thereby Bangladesh was liberated.