Administration Shibchar Thana was formed in 1930 and it was turned into an upazila in 1983. 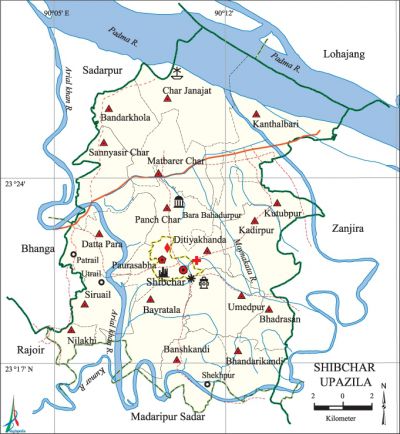 Historical events The great Islamic reformist of Bangladesh haji shariatullah (1781-1840) was born at village Shamail of this upazila. In the nineteenth century faraizi movement was initiated in this region under his leadership, which later on spread all over East Bengal. His son Muhsinuddin Ahmad Alias dudu miyan (1819-1862) re-established the 'Panchayet System' in the Faraizi dominated region; he even formed a lathial bahini (affray fighters) for self defense. The people of this upazila played a distinctive role in the anti British movement and in the war of liberation. The Pak army in collaboration with the local razakars conducted violation of women, killing, torturing and plundering in the upazila; they also set many houses of the upazila on fire. A number of skirmishes were held between the freedom fighters and the Pak army and razakars. The freedom fighters raided the Shibchar Police Station (thana) on 27 November and captured all arms and ammunitions of the thana. In this encounter three freedom fighters were killed. The freedom fighters also captured 17 razakars of the thana who were subsequently shot dead at the playground of Datta Para TN Academy. Shibchar upazila was liberated on 27 November. This day is being observed as the 'Liberated Shibchar' Day'.