Stem Borer (majrapoka) any of the numerous species of lepidopterous insect pests that habitually bores into the stem of the host plant and feed on the inner tissues. Most stem borers belong to the families Pyralidae and Noctuidae, and the immature insects, the caterpillars, tunneling in the stems and feeding on the soft tissues, cause the injury.

Probably of all insect pests, the stem borers are most damaging, and most field crops, particularly different cereals are affected each by more than one species of borers. The relative importance of the different species attacking any particular crop changes from country to country, and depends upon the crop variety and intensity of pest population. 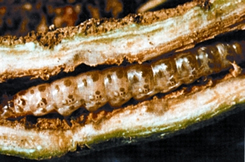 The adult moths lay eggs in masses on the leaf surface or inside the leaf sheath. The life history pattern of most species of stem borers is more or less similar. The newly hatched caterpillar enters the leaf sheath of the plant and then bores into the stem where it passes the entire larval life. The mode of entry into the stem however, varies in different species. In most cases the mature larva before pupation makes provision of an exit hole through which the adult moth emerges at the end of pupal period.

In Bangladesh over a dozen of pyralid and noctuid moth borers have been recognised infesting rice, maize, wheat, and sugarcane. A single species often infests more that one type of crop. Considerable confusion exists over the identity of some pyralid stem borers occurring in Bangladesh and in the neighbouring countries. A list of the major stem borer of different cereal crops is given in the table below.

The most conspicuous symptoms of stem borer attack are usually expressed in the formation of 'dead hearts' or discoloured apical shoot, and branching of the growing plant. In rice, panicles with empty or partially filled grains often result.

Sporadic outbreaks of rice stem borers are reported from different districts of the country. Heavier infestations occur in the southern and eastern districts, especially in regions with continuous cropping. The relative importance of the various species varies with the seasons of the year. Stem borers of wheat and maize do not pose a great threat to those crops. The top shoot borer of sugarcane often inflicts significant damage to the newly planted setts and ratoon crops.

Plant resistance to stem borer proved to be rather ineffective in most cases. Since early fifties many insecticides have been screened for the control of stem borers particularly rice borers in Bangladesh. Both foliar and granular insecticides, especially diazinon, bidrin, dimecron, lebaycid, basudin, sevidol etc were widely used to control the stem borers. [SM Humayun Kabir]