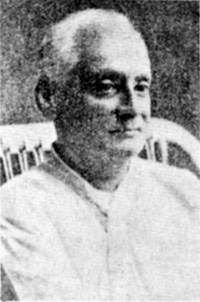 Tagore, Gaganendranath (1867-1938) painter and art connoisseur. He was also well known as an actor. Gaganendranath Tagore was born in the Tagore family of Jorasanko, Kolkata on 18 September 1867. The family, famous for its immense wealth, patronised art and culture. Gaganendra lost his father at the age of only 14 and thus his formal education came to an abrupt end. He had, instead, to bear the burden of the zamindari and shoulder the social responsibilities as the head of the family. He had, great love for Indian and western literature. He built up a huge library in his own house. Gaganendra, unable to have formal schooling, was, like his more famous nephew rabindranath tagore, a self-taught man.

It appears that Gaganendra did not follow any definite course of art education to be a painter. At first he got training with Harinarayan Bandyopadhyay to use occidental watercolour in painting. Afterwards Japanese painter Yokohama (Okakuru) and Tykan (Taikowan) influenced him. He drew some paintings for Rabindranath's Jibansmrti (1912) wherein marked Japanese influence is seen. By his hard labour he gave a new lease of life to The Indian Society of Oriental Art established in 1907.

Gaganendra revitalised the society by periodically holding lectures on art, publishing an art journal edited by OC Ganguli, and arranging exhibitions on Oriental art. The first such exhibition was held in December 1919 at the government house, Calcutta. His important works from 1910-1921 were the sketches of the Himalayas, the life of chaitanya through art in chronological sequence and the wonderful drawings depicting the Indian life. His works were published in the following three volumes: Abadhut Lok (1915), Birup Bastra (1917) and Naya Hullod (1921). Art critics opined that these expressive works of Gaganendra were 'unique in their execution and originality'. The life-style of the rich and the nobility found expression in these paintings.

There was a change in the life of Gaganendra as an artist after 1920 when he assimilated various forms of French art. He also tried to admixture the three-dimensional French and German styles. He did never blindly imitate the western art style; his works were rather closer to the College initiated by the French and the German artists. His main contribution consisted in fruitful exposure of light and shade. An important feature of many of his paintings was their excellent brightness and gorgeousness of colours. The introduction of geometric figures featured in the second stage of his trials with various methods. Towards 1930 there was a clear indication in his paintings of the expression of feelings symbolic of death and supernatural objects.

Gaganendranath, the initiator of using brash and ink in the field of modern painting, was not only a painter; his originality in designing furniture in the national tradition and the inner decoration of the house cannot be ignored. He, imbued by the swadeshi movement of the early 20th century, discarded the luxurious western flower vases and Victorian furniture from the paternal Jorashako house accumulated during three generations from the time of Prince dwarkanath tagore. He contributed greatly to the re-introduction of homemade articrafts and endeavored to make the cottage industry of Bengal popular. In 1916 he performed the responsibilities as one of the secretaries of the Bengal Home Industries Association, established through the patronage of lord carmichael, the then governor of Bengal.

Gaganendranath was also an excellent performer as an actor. He staged the 'Falguni', a drama of Rabindranath, in the Bichitra Hall of Jorasanko in 1916 and himself played the role of the king. Annie Besant praised him much for his ability as an actor. He also successfully acted in the role of Emperor Vijayaditya in the play entitled Rinsodh Saradutsav and in the role of Baikuntha in the Baikunther Khata. He also showed mark of novelty in stage decoration and set designing. He tried to bring about changes in dress and wear and designed for the first time the Tibetan 'Buku' type over-coat that Rabindranath wore in his old age. He wrote the Bhodar Bahadur for children in 1926, which was published 30 years after his death. His patronage in various forms has benefited vangiya sahitya parishad.

Gaganendranath may be considered to be the harbinger of modern art in its various dimensions. His paintings depict insight and expressiveness and were exhibited in Paris, London, Hamburg, Berlin and some cities of America from 1914 to 1927 and praised even by hard-liner critics. In spite of his being considered to be the forerunner of modern painting and always extending his helping hands to promising painters, Gaganendranath could not create a school of followers, nor could he create any specific trend for the posterity. He, however, has attained a high position among the progressive artists. [Aksadul Alam]