Thakurgaon District (rangpur division) area 1809.52 sq km, located in between 25°40' and 26°12' north latitudes and in between 88°05' and 88°39' east longitudes. It is bounded by panchagarh district on the north, Panchagarh and dinajpur districts on the east, west bengal state of India on the south and west.

Administration Thakurgaon Sub-division was established in 1860 under the district of Dinajpur and was turned into a district in 1984. Of the five upazilas of the district thakurgaon sadar was the largest (683.45 sq km) and haripur is the smallest (201.06 sq km).

History of the War of Liberation On 17 April 1971, the Pak army brutally killed a number of Bangalis on the road side of the Bhatarmari Farm of Pirganj upazila. During the war of liberation the Pak army brutally killed 18 persons at village Belcha Zhikra of Baliadangi upazila. On 28 April, the Pak army shot two freedom fighters dead at village Chhota Palashbari and Bara Palashbari; besides, they also shot 9 innocent persons dead on the bank of the river Tirnai adjacent to the Kushaldangi Hat. On the same day, the Pak army killed 7 persons at Kaliganj. In 1971, direct encounters were held between the freedom fighters and the Pak army at Bhulli, Gareya and Salandar of Thakurgaon sadar in which many people were killed and wounded. Besides, the Pak army conducted mass killing and plundering in Haripur upazila; they also set many houses of the upazila on fire. 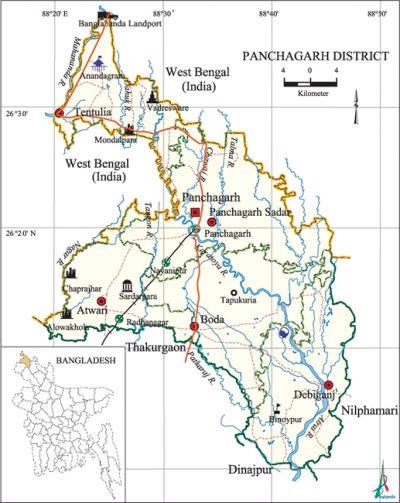