Victoria Memorial the magnificent white marble building at the southern end of Calcutta Maidan set up in memory of Queen Victoria, who died in January 1901 at the age of 94. lord curzon, the then viceroy of India, in order to set up a befitting memorial for the queen, proposed the construction of a mausoleum in the centre of a garden and a museum in the same complex, which would house artefacts pertaining to British rule in India. Its foundation stone was laid by Prince of Wales, later George V, on 4 January 1906, on his princely excursion to Calcutta and was inaugurated by Prince of Wales, later King Edward VIII, on 28 December 1921.

Though the memorial consists of numerous hybrid features like its Italian-style statues, Mughal domes, use of marble like the Taj and tall elegant open colonnades along its sides, the building is a splendid example of colonial style of architecture, which combines the European style and the Indo-Islamic style. The period of European colonisation and the subsequent British rule in India had its impact on Indian architecture. The main manifestations of this style of architecture were churches, barracks, forts, residential quarters, administrative quarters etc. The British also introduced new techniques in the construction of buildings, which were different from the ones used by the indigenous people of India at that time. The memorial is one of the finest examples of the European style of architecture found in India, which also paved the way for modern architectural styles to develop in post-independent India. 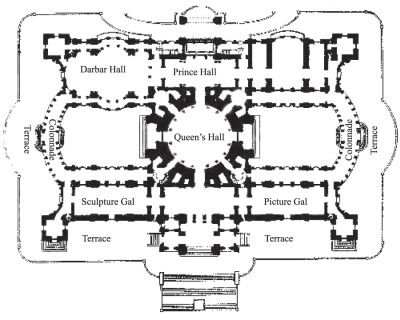 Ground plan of the Victoria Memorial

Sir William Emerson, President of the British Institute of Architects, designed and drew up the plan of this building and to supervise the construction of the building on site Vincent J Esch, an assistant Engineer in the Bengal Nagpur Railway, was appointed as the superintending architect. In 1902, Emerson engaged him to prepare a sketch of his original design for the Victoria Memorial. The work of construction was entrusted to Messrs Martin and Co of Calcutta.

Building operations on the memorial were slow to get started, and had not properly begun by the time Curzon left India at the end of 1905. They were then subject to further delays as his successors had less enthusiasm for this inherited scheme, and lengthy tests had to be made on the foundations. Construction of the substructure began in 1904, foundation stone was laid in 1906, but it was a further four years before work on the superstructure got under way.

By the time the construction of the memorial began in earnest, in 1910, Esch had established himself as Calcutta's leading architect. He was then formally appointed the Superintending Architect of the project.

Sir William Emerson drafted his plan, modelling the building on the tradition of the Italian renaissance architecture, though it unmistakably resembles the Taj. Still, Sir William described his model as an occidental design. Without mentioning the details, however, it reflects the Indian character. Curzon insisted that the memorial should be built of white marble. There is also a correspondence in the forms; the great dome, clustered with four subsidiary octagonal domed chattris, the high portals, the terrace, and the domed corner towers. Even in the function there is also a great similarity. Like the Taj, the Memorial too was intended to bear the remembrance of an Empress.

The memorial is situated on 64 acres of lawns, ponds, shrubbery and herbaceous borders and nothing in Calcutta ever had more pleasing or more amply open surroundings. The building, covering an area of 103.02m by 69.49m, is 56.08m high up to the base of the figure of Victory, which is another 4.88m high. The mercantile class and some of the princely states of India entirely and voluntarily subscribed the total cost of its construction amounting to Rs 1,05,00,000. It is said that a goods train about 27 km long would have been required to bring the entire building materials needed for the memorial. The total weight of the building has been calculated to be around 80,300 ton and the quantity of marble for it measured 450.24 cubic meter. The marble for the memorial was acquired from the same quarries of Makrana in Rajasthan, from where shahjahan had obtained marble for the Taj. The cost of marble, including freight charges, was initially estimated to be around Rs 2.5 million. Later, the expenses were reduced by Rs 200,000, when the Indian Railways waived the transport costs and offered free carriage. 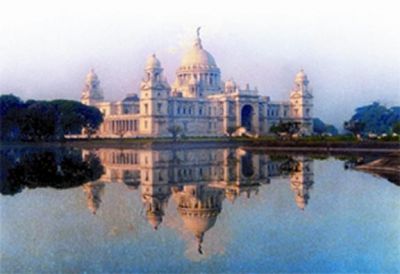 There are 25 galleries in a chamber beneath the dome. The Queen's Hall, walls of which have been deeply graven with the text of Victoria's proclamation, draws the main attraction. There are many paintings reminiscent of various events of her life: her coronation, her marriage, the baptism of her son and heir, her son's wedding, her residence of Frogmore etc. Some of her possessions, like the pianoforte, at which she received tuition in childhood, the writing desk and chair occupied for daily correspondence at Windsor, the last letter she wrote to her people in India etc.

There are portraits of other Britons who were in Calcutta at one time or another: Macaulay, Kipling and Bishop Heber and William Hickey. Some Indian faces are also displayed without discrimination. Among these are - keshab chandra sen, michael madhusudan dutt, rabindranath tagore and his enterprising grandfather dwarkanath tagore. There are documents, including the forgery which had nanda kumar judicially executed. There are mementoes of British imperialism, like statues and bust of Queen Mary, Geroge V, and French guns captured at the Battle of palashi in 1757 etc.

The main attraction at the memorial is the huge sombre statue of the queen, which is flanked by two ornamental tanks. Many of India's old rulers are represented here in stone, quite often dressed in Roman togas, like clive, warren hastings, cornwallis, wellesley, dalhousie.

Emerson's design was much enhanced by the sympathetic ornaments added by others. Vincent Esch's major contribution was the redesign of the foundations on innovative principles for which he was renowned, but he also supervised the production of the allegorical sculpture groups over the entrances and designed the elegant bridge on the north side, and the gates to the gardens. The groups of figures above the north porch represent Motherhood, Prudence and Learning. Surrounding the main dome are figures of Art, Architecture, Justice, Charity etc. The spaciousness and restraint of the gardens emphasise the building's majesty.

A black bronze angel, known as Victory, holding a bugle in her hand was placed at the apex of the dome and has always been regarded as a curious addition to the monument. The statue, about five meters tall and weighing 3,500 kg is fixed to its pedestal with ball bearings and can rotate when the wind speed is high enough. Italian craftsmen sculpted the various statues that adorn the large garden of the monument. Another sculpture on the northern side depicts a lion's head with water flowing out of it and passing into four troughs representing the Indus, the Ganges, the Jumna and the Krishna.

The memorial today treasures many paintings, attires and other items used by the British during their rule in India. This building, which housed around 3500 items, can also be termed as the British Museum. Today it is the main attraction for the tourist in Calcutta. The Fountain of Joy in the premises of the memorial presents an atmosphere of memorable charm. [Md Muktadir Arif Mozammel]