Alimullah, Khwaja (?-1854) founder of the Nawab Family of Dhaka. Born in Begum Bazar, he was the son of Khwaja ahsanullah (d 1795 AD). Alimullah lost his father in childhood and was brought up under the care of his uncle, Khwaja Hafizullah who was childless. Hafizullah made his fortune in trade and commerce. Leather and salt were the major items of his business. He had some Greek trading partners. Alimullah took major responsibilities in the business of Hafizullah. After the permanent settlement, Hafizullah purchased some zamindari estates and indigo factories in Barisal. Alimullah became his sole heir and himself bought extensive landed estates in Barisal, Khulna, Dhaka, Mymensingh and Tripura. He acquired extensive landed property in and around Dhaka city. He had a moneylending business and was one of the major shareholders and directors of Dhaka Bank. In 1830, Alimullah purchased the French Trading House at Kumartuli and renovated it into his own residence. This mini palace subsequently became the nucleus of the famous ahsan manzil of Dhaka. 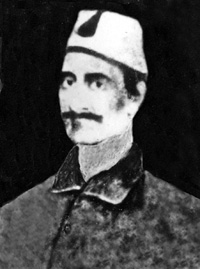 In 1848, Khwaja Alimullah made a waqfnama turning all his property, landed and otherwise, into an indivisible family concern. He appointed his second son Khwaja Abdul Ghani Mia Mutawalli (Administrator) of the waqf. This waqfnama saved the Khwaja Estate from sub-division and fragmentation like other landed estates through a series of successions and transfers and this measure, in fact, laid the foundation of the nawab family of Dhaka.

It empowered the Mutawalli to administer the zamindari and other concerns of the family as representative and sole spokesman of the family and distribute the family income in the form of individual allowances stipulated in the Waqf deed. It was the responsibility of the Mutawalli, according to the waqfnama, to appoint his successor from amongst family members deemed to be most competent to manage the family affairs.

Through his long association with his Eurasian and European business partners, Khwaja Alimullah acquired their lifestyle and habits. He bought thoroughbred horses for racing and made a modest stable for them. By setting up the ramna racecourse and the Gymkhana Club, he earned considerable fame as an organiser of sports. Alimullah used to go hunting with horses and elephants. He introduced dance, music and moshairah (literary meet) in the Khwaja family.

Khwaja Alimullah took part very actively in the corporate activities of the city. He became a member of the Dhaka Municipal Committee, which was formed in 1840. He played an important role in the preservation of lalbagh fort. Like his European landed counterparts, Alimullah also developed a fancy for jewels, sports and games. At a government auction in 1852 he purchased the famous diamond daria-i-noor which in value and purity, is comparable to the world-famed Kohinoor.

He made a wakf of the income of his estate at Atiya Pargana in Tangail for the welfare of the destitute. After the death of ghaziuddin haider, the last naib nazim of Dhaka in 1843, Khwaja Alimullah bore all the expenditures of the traditional Muharram festival of the shia Muslims, although he himself was a sunni. The government had, in recognition of his patronage of the shia community, appointed him the Mutawalli of husaini dalan, a shrine of the shias.

Khwaja Alimullah died on 16 Bhadra, 1261 corresponding to 1854 AD in Dhaka and was buried in the family graveyard at Begum Bazar. [Mohammad Alamgir]