Ramna Racecourse now known as Suhrawardy Uddyan, is surrounded by the old high court building and the mausoleums of the three National leaders Sher-e-Bangla, ak fazlul huq, khwaza nazimuddin and huseyn shaheed suhrawardy to the south, bangla academy, atomic energy commission, bangladesh national museum, Public Library, and the Teachers Students Centre, Institute of Fine Arts and the main mosque of the university of dhaka to the west, birdem hospital, dhaka club and Dhaka Tennis Complex to the north, and the Supreme Court, the institute of engineers, and the Ramna park to the east.

Starting journey as Bagh-e-Badshahi during the Mughal rule, the area later turned into Ramna Racecourse ground, which occupies a glorious position in the history of Bangladesh. The actual area of greater Ramna was, however, much larger than the Ramna Racecourse.

The greater Ramna area covers Azimpur, new market and dhanmondi to the west, Secretariat building, Curzan Hall and Chankhar Pool to the south, Purana Paltan, Segunbagicha and Rajarbagh to the east, and Central Road, Paribagh and Eskatan to the north. One of the four police stations of Dhaka city during the British and Pakistan periods was named the Ramna police station that still operates as an important police stations of the city.

The history of Ramna starts about 1610 AD during Mughal rule, when the city of Dhaka was founded by Subedar Islam Khan under Emperor jahangir. At that time two beautiful residential areas were developed in the northern suburb of Dhaka city. One of them, the Mahalla Chistia was named after the brother of islam khan chisti, the Mughal ruler of Dhaka and the other Mahalla Shujatpur, after Shuja Khan, a military commander under Islam Khan. New residential houses, gardens, mosques, tombs and temples were built in this area during that period. After the fall of the Mughal rule, Ramna gradually lost much of its glory. There were very few references of Ramna in official documents of the east india company. In fact, Ramna was then a barren area with bushes and abandoned and/or dilapidated buildings, old temples and tombs.

Ramna started to regain its glory since 1825, when Mr Dowes, a British collector of Dhaka initiated a series of steps for development of the city. That year he cleared up the bushes and demolished most tombs and monuments except the Ramna Kali Mandir (temple of goddess Kali), one of the most prominent temples in Dhaka. The old mosque and tomb that now stand by the western side of old High Court building also remained untouched. The renovated area was given the name of Ramna Green and was fenced by a boundary for using it as a racecourse. The old Kali Mandir standing at the centre of the racecourse belonged to the Hindu sect Dashnami. A devotee of goddess Kali believed to have come from Nepal had established the temple. The temple was later repaired and renovated by Rani Bilasmoni Debi of Bhawal. It was totally destroyed by the Pakistani Army in the night of 25 March 1971.

The horse race became very popular in Dhaka under the patronisation of the nawabs of Dhaka. A stable was built for the horses of the Nawabs of Dhaka at Kataban, on the northern side of Mohsin Hall, a dormitory for the students of the University of Dhaka. The Nawabs developed the racecourse area as a beautiful garden and named a part of it as Shahbagh, the royal garden. The Nawabs also set up a zoo at Ramna. In 1851, the European civil servants established the Dhaka Club on the northern corner of the racecourse and after the partition of bengal during lord curzon, Ramna was chosen to locate the governor house of the new province of Eastern Bengal and Assam. 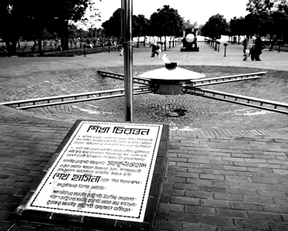 After partition of India in 1947, the Ramna area continued to occupy an important place in the history of Dhaka city. A new road from Shahbagh to the Eden Building was constructed and the eastern side of the road was developed as the Ramna Park. The zoo with a few animals and different kinds of birds were still there to the northeastern side of the present Supreme Court building. The zoo was later shifted to its present location at Mirpur.

In 1969, a civic reception was organised at the Ramna Racecourse in honour of sheikh mujibur rahman on his release from jail and he was accorded the title Bangabandhu in the reception. awami league arranged a huge public meeting at Ramna Racecourse ground on 3 January 1971 and all the elected members of the National Assembly, in which the party owned majority, publicly took oath of not betraying the cause of the Bangali people under any circumstances.

It was again the Ramna Racecourse ground, where, at a mammoth gathering on 7 March 1971, Bangabandhu delivered his historic speech (seventh march address) and virtually declared independence by saying that 'the struggle this time is the struggle for freedom; the struggle this time is the struggle for independence. After nine months of the heroic war of liberation, the Bangali nation achieved victory and the Pakistani occupation army surrendered formally at the Ramna (Suhrawardy Uddyan) on 16 December 1971, which is now observed as the Victory Day. The mammoth public meeting jointly addressed by the Indian Prime Minister Indira Gandhi and Bangabandhu Sheikh Mujibur Rahman on 17 March 1972 was another important event that took place at Suhrawardy Uddyan. By that time, the Ramna Racecourse became an important place of public and political gathering. The huge ground, however, was converted after 1975 into a park with greens and walkways. At present, there is an entertainment zone for the children at one part of the park, attractions in which include marry-go-round, rides, play courts and food and souvenir corners.

With an idea to commemorate the important events that took place at Suhrwardy Uddyan and the role of the historic ground in the movements of the nation for independence, the government of Bangladesh set up an Eternal Flame at the ground in 1996. Simultaneously, the government started construction of the National Independence Tower almost adjacent to it, at the location where the Pakistan Army signed the surrender document. [Syed Sadiqur Rahman]