Azimpur Mosque located beside the Azimpur public graveyard in the city of Dhaka, the mosque has been so extensively repaired and altered that it now seems from outside to be a modern building. A Persian inscription still fixed over the central doorway of the mosque records that it was built by one Faizullah in 1746 AD. 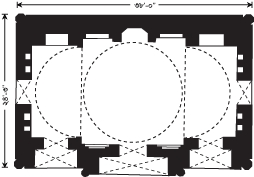 It is a two-storied structure, the lower one being a vaulted platform. The upper storey consisted of the main mosque building and a spacious structure to the north of the mosque, but the latter is no longer extant. A stairway on the northeastern corner leads up to the top of the platform. The vaulted platform with a height of about 4.27m from the ground level forms an irregular rectangle, 22.86m from north to south and 16.76m from east to west. Underneath the platform are a series of rooms on the eastern and northern sides, all opening outside through wide archways. The ceilings of these rooms are flat on the top but barrel-shaped at the sides. All these rooms must have originally been furnished with shelves on the walls, examples of which are still preserved in the rooms on the northern side. Some of the students of a newly built madrasa nearby have been given residential accommodation in these vaulted rooms. 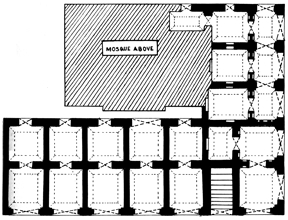 The overall plan of the Azimpur mosque-complex is same as that of Khan Muhammad mirdha mosque (1704-05), located about 1.5 km away from it. The building to the north of the mosque proper occupying the top of the platform has now disappeared. In all probability this structure may, therefore, be suggested to have been originally meant not for a hujra but for a madrasa like that of Mirdha's mosque. The existence of the vaulted rooms below with bookshelves on their walls strongly suggests that. In that case these vaulted rooms must have been used as a dormitory for students and teachers of the madrasa.

The mosque proper, occupying the south-western part of the platform, is oblong in plan, 11.58m from north to south and 7.32m from east to west. The four octagonal corner towers, which are built within the thickness of the walls, must have originally gone beyond the parapet in the usual Mughal fashion, but their tops have been removed at the time of making multi-storied extensions on the sides of the mosque proper.

The interior of the mosque could be entered through five arched doorways - three in the east and one each on the north and south sides. The three eastern doorways, each opening out under a half-domed vault, consist of two successive arches - the higher and wider outer ones of multi-cusped design and the smaller inner ones of plain four-centred type. The central doorway, bigger than its flanking counterparts, has been built within a projected fronton bounded by slender semi-octagonal turrets on either side. In the axis of the three eastern entrances there are three mihrabs inside the qibla wall. The central mihrab is larger and semi-octagonal, but the side ones contain simple rectangular niches.

The interior of the mosque is divided into three bays - the central one square and the side ones oblong. The side bays are entirely covered with half-domed vaults, but the central square bay is roofed over with a big hemispherical dome with lotus and kalasa finial. The central dome is directly placed on an octagonal drum, which is carried on the half-domed vaults on the side and the blocked arches over the central doorway and the central mihrab. The phase of transition is executed with the help of small half-domed squinches on the upper corners. The cornices and parapets of the mosque are horizontal.

The octagonal corner towers and the turrets on either flanks of the projected frontons have beautiful kalasa bases. The apex of the dome is internally embossed with a large medallion, which is further ornamented with a rosette. The parapets and the octagonal drum of the dome are externally decorated with rows of blind merlons. The panels on the eastern facade of the mosque have disappeared. The slightly projected rectangular frame, which encloses the central mihrab, is crowned with a frieze of blind merlons.

In conception and other details the Azimpur Mosque compares well with Mirdha Mosque and a number of its kind in the city of Dhaka. As such the building should be regarded as a 'Residential Madrasa Mosque.

Special mention should be made of the roofing pattern of the mosque proper. In Bengal this is the last known example of the type consisting of a single dome and a flanking half-domed vault on either side. Such a roof arrangement, evolved through some late 17th and early 18th century buildings of south-eastern Bengal, shows a fully matured and developed form in the present example. In the previous examples, as in the Atarou Mosque in Sathkhira (late 17th century) and the Mograpara Mosque in Narayanganj (1700-01), the flanking half-domed vaults are very small in comparison to the central dome and could only be seen from within the building. But in the present example these vaults are so large that they form an indispensable part in the overall scheme of the roof plan. Moreover these vaults are distinctly visible from the outside. It is not unlikely that the influence came from the Ottoman buildings either through the Armenians who settled in Dhaka during Mughal rule, or through the fortune seeking immigrant artists from the Ottoman empire who came to Mughal Dhaka along with the merchants of the Middle Eastern countries. The standard plan of Ottoman mosques, as in the Mosque of Bayezid (1501-05) and Shahjada Mosque (1543-48) in Istanbul, has two or four half-domes beside the central dome. [MA Bari]