Babuganj Upazila (barisal district) area 164.88 sq km, located in between 22°44' and 22°56' north latitudes and in between 90°15' and 90°23' east longitudes. It is bounded by gaurnadi on the north, barisal sadar and jhalokati sadar upazilas on the south, muladi and Barisal Sadar upazilas on the east and wazirpur upazila on the west.

Administration Babuganj Thana was established in 1906 and it was turned into an upazila in 1983. 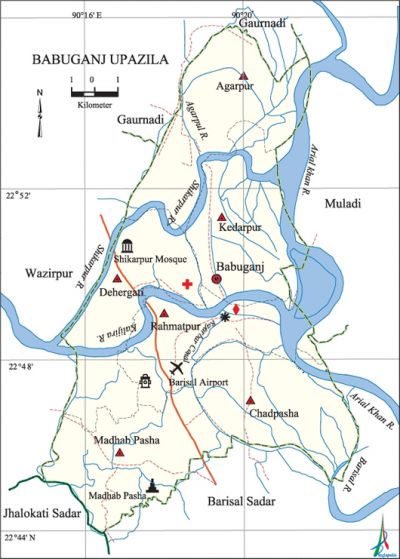 History of the War of Liberation During the war of liberation the Pak army burnt the entire village Karikarnagar of Chandpasha union and killed 10 persons.

Natural disaster Many high land of Babuganj upazila were transformed into depressions due to devastating earth quake in 1762. Many people of this upazila died as a result of cyclone in 1770 (BS. 1176), 1822, 1825, 1832 and 1855. A serious famine occurred due to flood causing damage to crops. Besides, cyclone and tidal bore of 1960, and 11 and 12 November of 1970 resulted in heavy loss of life and property of the upazila.