Bakhshi Hamid Mosque is situated in the village of Hilsha under Banshkhali thana of Chittagong district. Built in brick the mosque is enclosed by an outer wall with an arched gateway in the middle of the eastern side. The gateway is exactly on the axis of the central doorway of the mosque proper. Emphasised with octagonal towers on the exterior angles the mosque measures 11.73m by 7.62m on the outside and 8.99m by 4.88m inside. It is worth noting that the corner towers here are contained within the thickness of the walls - a practice that appeared earlier in shaista khan mosque (c 1664) at Dhaka and the bibi mariam's mosque (c 1680) at Narayanganj. 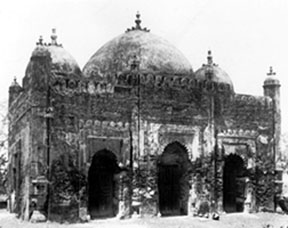 The mosque is provided with five arched doorways - three on the eastern facade and one each on the north and south sides. The three eastern doorways, all-opening out under half-domed vaults, have cuspings on their outer faces. The western wall is internally recessed with three mihrabs. The large central mihrab is semi-octagonal but the sides ones are rectangular.

Both the central mihrab and the central archway have the usual rectangular projections, which are bounded by bordering circular turrets. These turrets are also extended above the parapets and crowned with crude types of cupolas and kalasa finials.

The internal disposition and roofing system of the mosque are exactly the same as in the bagh-i-hamza mosque (1682) and mahmud khan’s mosque (c 1688), both in the city of Chittagong. One can see from within the mosque that a half-domed vault on either side flanks a large central dome, but on the outside the roof consists of three bubble-shaped domes on octagonal drums, of which the central one is bigger than its flanking counterparts. These two side domes are false, placed above the half-domed vaults. The domes are all crowned with beautiful lotus and kalasa finials. The inner side of the central dome has a row of basal leaf ornamentation, while its apex is embossed with a full-blown three-tiered rosette.

The building, both inside and outside, is covered with plaster. The corner towers and bordering turrets have beautiful kalasa bases; and the towers are divided into sections by moulded bands. The parapets and the octagonal drums are decorated with rows of blind merlons. The three eastern archways are each contained within a rectangular frame, the frame being topped by a frieze of blind merlons. The central doorway frame is richly ornamented with terracotta plaques showing varieties of motifs such as full-blown tiered rosettes, net patterns and different types of interlocking designs. The spandrels of all the three eastern doorway arches are embellished with stucco floral scrolls.

All the mihrabs show four-centred arches, and only the central mihrab has an additional outer arch of multi-cusped design, which springs from decorated brick pilasters. The central mihrab is kept within a boldly projected rectangular frame, which again is crowned by a row of blind merlons.

The mosque illustrates a happy blend of Mughal elements with regional elements of the Sultanate period. The former is best represented by the domes on drums with lotus and kalasa finials, the horizontal parapets, the projected frontons with bordering turrets, semi-octagonal mihrab niches and stucco ornamentation, and the latter by terracotta ornamentation.

An Arabic inscription fixed over the central mihrab records the construction of a mosque by sulaiman karrani in 1568. But its different architectural peculiarities strongly suggest that the present mosque is out and out a Mughal building. It is not unlikely that the inscription was taken from somewhere else and fixed in this mosque later on. The original inscription, now missing, was fixed over the central doorway on the eastern facade, where there is still a vacant space. Local legends relate that one Bakhshi Hamid built the mosque in 1692 and it still goes by his name. There may be some truth in the tradition as it is stylistically identical with the Bagh-i-Hamza Mosque (1682) and Mahmud Khan's Mosque (c 1688). [MA Bari]