Bangla College located at Mirpur, is one of the leading government institutions. The College was established in 1962 with a view to introducing Bangla as a medium of higher education to establish the language in all spheres of national life of Bangalees. 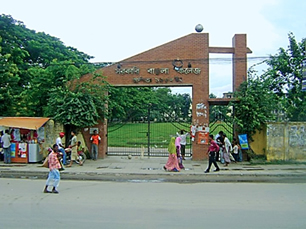 Abul Kashem, former Professor of Physics, university of dhaka and President, Tamuddun Majlish was the leading initiator who came forward to set up the College. In 1961, he had consultations with some educationists and intellectuals regarding the setting up of the Bangla College. He formulated a plan to establish 'Bangla' as the working language of government offices and the medium of instruction through that venture. A preparatory committee was constituted for that purpose comprising some activist of Tamuddun Majlish including Dr. muhammad shahidullah, (Principal) ibrahim khan, and Dr. Innas Ali. The committee after having a series of internal meetings convened a general meeting at bangla academy on 15 February 1961 with Dr. Muhammad Shahidullah in the Chair. Leading educationists, literateurs, journalists and top elites of the country took part in the meeting, which adopted a resolution to set up a Bangla University in Dhaka. As a first step to materialise the plan the meeting decided to establish 'Bangla College'. The next follow-up general meeting was held at the some venue on 19 February 1961. Presided over by Khan Bahadur Abdur Rahman Khan, the second meeting was participated by 26 distinguished educationists, Writers and journalists. A 51-member organising council was formed in the meeting to set up Bangla College with the then governor of East Pakistan Lt. General Mohammad Azam Khan as its chief-patron.

The Bangla College Organising Council in its meeting held at Bangla Academy conference room on 18 June 1961 took a decision to launch the academic programme from the next month (July 1961). The plan to run a Degree College, designed and presented by Professor Abul Kashem was adopted unanimously in the meeting. According to the plan, the meeting decided to include the departments of Bangali, English, Political Science, Islamic History and Culture, Economics and Elementary Sciences under the Faculty of Arts and Physics, Chemistry, Mathematics, English and Sociology under the Science Faculty. It also adopted a resolution to appoint ten Professors including the Principal and Eleven Staffs of the College immediately. The Council also decided that the teachers would deliver their lectures in Bangla. They would also prepare the handouts in Bengali for the students till the textbooks were written in Bangali. It also gave a decision to publish all the handouts and lecture notes in the form of subject-wise books at the end of the year.

The fourth meeting of the Bangla College Organising Council was held at the East Pakistan Writers Guild Office on 4 March 1962 with Khan Bahadur Badiur Rahman in the chair. The council discussed two important agenda: Fund raising and site selection for Bangla College. A 9-member Fund Raising Committee for Dhaka and another similar Committee for Chittagong were formed. But the Council could not find out a suitable house for the College in Dhaka and for that reason at last, the academic programmes of Bangla College with only 30 students began as a night college from 1 October 1962 at the building of nabakumar institute of Bakshibazar. During the 1962-63 academic session, students were only enrolled in Intermediate (Humanities group) and BA first year. Intermediate Science group was opened here in 1963 and following these steps the number of students increased to 450 by 1964.

At the outset, the Principal, the Vice Principal and some Professors served in Bangla College without taking any salary for over a year and later a few of them started taking token money. Principal Abul Kashem himself offered voluntary services to the College for eight years and even a room of his Azimpur residence with furniture land logistics was used as the College office for years together as there was no space for that purpose in the building of Nabakumar Institution. There was a provision of holding weekly and half-yearly examinations in the College, which helped it to become a leading institution of the country with in a couple of years. The passing percentage of the college in the BA Examinations was 87.5% in 1964.

The Education Board granted permission to introduce Physics, Chemistry, Mathematics and Biology in intermediate level in 1963. The commerce section was opened in 1965 and permission to open Bcom and BSc sections was obtained in 1969.

Nabakumar Institution continued to provide accommodation of Bangla College in its school building during night for 7-8 years. Then Bangla College had to leave that place as that building was allotted to Dr. Muhammad Shahidullah College. After a series of effort in 1964, the government acquired and allotted a piece of 12 acres of land full of bush and ditches at Mirpur as there was no specious land was found with in the then territory of dhaka City. Following the efforts of the then DPI Ferdous Khan Bangla College adjacent to the acquired land was purchased for the extension of College with the government's contributions. The construction of College building, which was completed partially in 1969. On 4 October of the same year, Central Education Minister of Pakistan Mohammad Shamsul Haq inaugurated the newly built campus launching the classes of BSc and BCom there.

When Bangla College was established, there was no suitable Bangali textbook although students of Intermediate and Degree classes and University level were permitted to answer the questions in Bengali in examinations. Even the questions were not written in Bengali till 1969. In this backdrop, Principal Abul Kashem alone wrote as many as 40 textbooks in Bengali on various subjects like Physics, Chemistry, Biology, Geometry, Algebra, Statistics and those were published by Bangla College. The College also compiled and published subject wise Bengali books to resolve the crisis of textbooks. Principal Abdul Kashem took steps to establish Bangla College and Bangla University confronting many hostile situations inspired by the idea and consciousness that it was possible to introduce Bengali in all sphere of life including administration and educational institutions. He motivated the people to use Bangla in signboards, nameplates, posters and banners through a concreted campaign involving students and teachers of Bangla College. That movement gave a fresh impetus to the mass uprising of 1969 initiated by the student community.

At the initial stage of the foundation period of Bangla College, influential contemporary daily newspapers Daily Ittefaq, Daily Azad and the Pakistan Observer extended strong support for its proper gestation. In the first meeting, the organisers took a decision to request the then universities, the textbook board and Bangla Academy to allow teachers and students to set questions language and to give answers in Bangla respectively. According to the decision of meeting, letters and memorandum were sent to the authorities concerned on behalf of Bangla College. A delegation from the College also called on the organisation heads to make them understand the issue. These steps, undertaken by Bangla College, could able to create a countrywide excitement, which paved the way for introducing Bengali medium education later in phases.

A few educated Bangalee scholars opposed the move of establishment of Bangla College on the ground that the Bangali medium students would be considered as less competent in the job market. They also used to make a taunting remark frequently that the scholars' knowledge would be confined within only Bengali and College would generate 'Bangla Moulavis'. In spite of this negative criticism, the Bengali medium education system earned a massive and speedy popularity.

During the great war of liberation in 1971, the Pakistani forces and their non-bengali biharis (Muslim immigrants came from Indian state of Bihar) collaborators occupied the college and closed it for the entire period of the war. The signboard of the college was replaced by another signboard inscribed 'Urdu College'. After the independence, the College started its new journey with fresh initiative. In 1985, the college was nationalised and Honours and Masters courses under the national university were introduced here in 1997. At present (2011), the college has 132 teachers and it offers BA, BBA and BSc (Honours) degree and Masters degree in 12 disciplines. It enrolls 800 students in higher secondary courses per year. [Ahmed Momtaz]