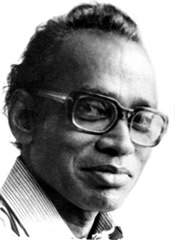 Chowdhury, Anis (1929-1990) writer and dramatist, born in Kolkata, where his father, Nurul Huda Chowdhury, originally from comilla, was posted as deputy magistrate. Anis Chowdhury's full name was Anissuzzaman Quamruddin, but his academic records listed him as Anisuzzaman Chowdhury. Anis Chowdhury was his literary name.

Anis Chowdhury received his initial schooling at Maijbhandar Sharif. He passed the Higher Secondary examination from presidency college in 1946 and the BSc examination from dhaka university in 1953. He joined government service in 1954 and worked for some time at Radio Pakistan, Karachi. After the independence of Bangladesh, he became deputy director at Bangladesh Television and then director-general of External Publicity. He worked in the Ministry of Foreign Affairs for some time on deputation in 1979.   Anis Chowdhury was appointed as the first press councilor at the Bangladesh Embassy in Pakistan. He was also advisor to a life insurance company. While still a student, during 1946-47, he worked as sub-editor of Ittehad, published from Calcutta. He wrote short stories, novels, plays. Two of his famous plays are Manchitra (1963) and Album (1965). Among his other writings are Sarobar (1967), Saurabh (1968), 'akher Putul (1968), Madhugad (1974), Pratyasha, Chhaya Harin, Chhadpatra, Jahabgirer Atmajibani (translation), etc. He was awarded the bangla academy Prize for his contribution to drama (1968). He died on 2 November 1990 in Dhaka. [Nazmul Ahsan]