Difference between revisions of "Classical Dance"

Classical Dance in the South-Asian context refers primarily to Kathak, Bharatnatyam, Kathakali, Odissi and Manipuri dances. These are traditional dances and associated with particular styles received from different regional schools. For example, Kathak is associated with northern India, Bharatnatyam and Kathakali with southern India, and Odissi and Manipuri with eastern India. However, most dances are performed all over India and Bangladesh. Unlike other Indian provinces, Bengal had no particular dance styles of its own. Bengali artistes learned classical dancing in the past from teachers coming from south India, Madhya Pradesh and Manipur schools of dances. During British rule, Indian classical dancing was patronised by the ruling classes, such as, rajas, maharajas, nawabs and zamindars as well as by British high officials who held 'nautches' in their private chambers. Professional dancing girls, known as baijis, were brought from Lakhnau to perform these dances, many of which were degenerate forms of the Kathak. As the quality of these dances declined, the dancers came to be held in disrepute. 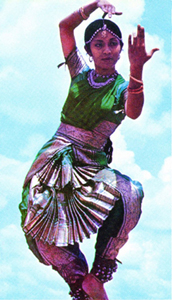 The Muslim society of East Bengal had little liking for dance performances because of religious reasons. However, after the partition of 1947, bulbul chowdhury, who had made a name for himself as a classical dancer in Kolkata, settled in dhaka. By merging classical dance forms with themes drawn from the Muslim past, he was able to gradually popularize dancing in the Muslim society of East Pakistan. He created many modes of dances of his own based on the Kathakali, Bharatnatyam, Kathak and Manipuri dance forms. By applying the different classical mudras (postures) and rasas (sentiments) to Chand Sultana, Anarkali, Dream of Hafiz, he created a strain of 'Muslim' dance.

After liberation, Dhaka became the centre of cultural activities. With the establishment of direct contacts with other countries, the cultural scene also witnessed major changes. Dance artistes cultivated the art with the benefit of new perceptions and renewed vigour. Many Bangladeshi artistes also went to India and received training in Bharatnatyam, Kathak, Odissi and Manipuri dances. The only classical dance which is not performed in Bangladesh is the Kathakali.

Bharatnatyam or the dance of Bharata, probably evolved from the classical style of dance depicted in Bharata's Natyashastra. However, some suggest that the word might be composed from the three initial letters of bhav, ras and tal (emotion or mood, sentiment and rhyme). This genre occupies a special place as the most graceful and charming of classical Indian dance forms. Different expressions and postures convey different meanings. For example, a glance may mean bashfulness or disregard, while movements of the eyebrows may indicate fear or suspicion. Movements of the limbs express minute emotions. In short, it can be said that Bharatnatyam links many art forms and gives symbolic form to the innermost feelings and sentiments.

Bharatnatyam has eight parts: alarippu (the movement of all the limbs to music), yatisvaram (the exhibition of dance sentiment to the accompaniment of music), shabdam (movement of steps to the bol or words). varnam, (conveying various thoughts and feelings through movement), padam (acting based on God and Goddess to music and bol), tillana (exposition of sentiment by a dancer in action), shlakam (glorification based on Nataraj) and avinayam (expression of Tamil, Telegu and Sanskrit shlak to classical modes by movement of all limbs, and acting).

Kathak is one dance form of Uttar Pradesh, in northern India, and is presented through intricate footwork and stylized movements to the sounds of the tabla and the bol. At the climax of the dance, the dancer whirls at an incredible speed.

The origins of Kathak are unknown. However, it appears that, like other classical dances, Kathak developed in the courtyards of Hindu temples and got a fresh lease of life under the patronage of the Mughal rulers. Kathak artistes experimented with newer rhythms, tempos and harmony to create new dance forms such as husnu, selami, ada, mehbuba, muskurahat, naz and ghungghat. Dance costumes also changed significantly. The male dancers, who had originally danced with dhotis and bare bodies, started wearing Persian-style garments, with short waistcoats and chooridar pajamas, or tight-fitting leggings, as did the female dancers, who had originally worn the ghagra, or flowing skirt, and choli, or tight-fitting, short blouse. Both male and female dancers wore caps on their heads. These costumes were embroidered in gold and silver and were very attractive to look at.

Kathak has three gharanas: Lakhnau, Jaipur and Benares. The Lakhnau gharana is, however, the most popular. Ustad Manzur Husain Khan, disciple of Achchhan Maharaj, came to Dhaka in 1965 and introduced the Kathak dance of the Lakhnau gharana in East Pakistan. 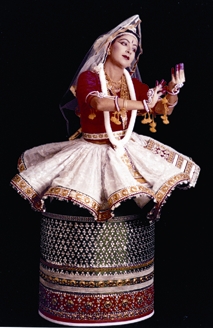 Kathak used to be the most popular of the classical dances in this region before liberation. Its apparent association with the Mughal and Muslim past appealed to people to whom Bharatnatyam, Manipuri and Odissi dances were associated with Hindu religious traditions. Among the well-known performers of Kathak in Dhaka are Shaju Ahmed, Munmun Ahmed, Shibli Mohammad, Kochi Rahman, Lovely Qureshi and Likhan Roy.

'Kathakali' is a South-Indian dance form, chiefly associated with Kerala. Its themes are drawn from epics like the ramayana and the mahabharata. Dancers wear masks or heavy make-up. Formerly, women did not dance the Kathakali, and female roles were performed by men, but this is changing.

Manipuri dance originated in the eastern Indian state of Manipur. It is greatly influenced by hinduism, the love of radha and krishna being its principal theme. It is usually accompanied by kirtan and songs in mixed Manipuri and brajabuli. Manipuri dances are of two kinds: virile, performed by men, and lasya, or amorous, performed by women. 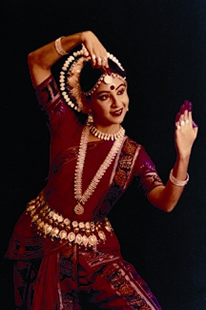 Several complex rhythms are used in Manipuri dance: kokilpriya, dharo, pavchamsowari, rudratal and visnutal. Many Manipuri dances are based on folklore, such as on the romance of the peasant boy, Khamva, and the princess, Thaivi. Other Manipuri dances include the khuvakaishe, pungchalan or khol dance, and the tamukhna and thangta jagoi which are based on the art of combat. Men perform these dances, which involve robust physical movements resembling kung fu, karate and acrobatics. Guru Maisvam Amuvi, Guru Hawvam Atomva, and Guru Amudan have helped to change the traditional outlook of Manipuri dance.

Odissi dance belongs to Orissa in eastern India, and perhaps dates back to the 2nd century BC. It reached its peak in the 12th and 16th centuries.

Forgotten for some time, Odissi was rediscovered through research after India's independence. Old coins, temple sculpture, and wall paintings, showing the postures of maharis, or temple dancers, were studied to recreate this dance form. Basic to the Odissi dance are the postures known as chauk and tribhangi: chauk is a quadrangular posture of the body created with the help of shoulders, hands, knees and legs; tribhangi is a triangular pose created by the dancer's hips, waist and head. Like other classical dances, Odissi has several parts: mangalacharan (prayer), bottu (initiation), pallabhi (proliferation), abhinay (acting) and moksa(liberation).

It is through the tireless and devoted efforts of gurus such as Pandit Kelucharan Mahapatra, Pabkajcharan Das and Mayadhar Raut that Odissi found its place in Indian classical dance. In a way it is the 'latest' of the classical dances, having been recovered through research in temple art. It has, however, become very popular even in Bangladesh, where a number of young dancers have taken it up. [Amanul Huq]