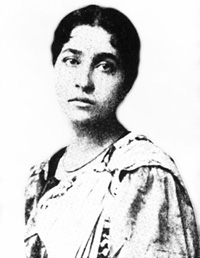 Devi, Priyamvada (1871-1935) litterateur, social worker, was born at Gunaigacha in pabna. Her father was Krishnakumar Bagchi and mother was Prasannamoyi, a well-known writer. ashutosh chaudhuri and pramatha chowdhury were her maternal uncles.

Priyamvada passed the Entrance examination (1888) from Bethune School and FA (1890) and BA (1892) from bethune college. In 1892 she married Taradas Banerjee, a lawyer residing in Madhya Pradesh. He died three years after their marriage. In 1896 Priyamvada lost her only son. Thereafter, she devoted herself to social services and literary work.In 1915 Priyamvada started teaching at Brahmo Girls’ School. She was also associated with a number of women’s educational institutions and for a considerable period of time headed the Bharat Stri-Mahamandal.

She earned considerable fame translating the Sanskrit play entitled Svapnavasavadatta and part of bible as Bhaktavani. Women of Japan is a noteworthy writing of her. Her books of poetry include Renu, Tara, Patralekha, Angshu and Champa O Parul. She also wrote 'Renuka', a story about Japanese geishas. Among her other books are Anath, Katha O Upakatha, Pavchulal, Jhilejabgale Shikar. Her writings contain a flair of pessimism. [Suresh Chandra Banerjee]