Durga Puja the most popular religious festival of Babgali Hindus, celebrates the return of the goddess Durga to her natal home. In other parts of India as well, Durga is worshipped, but under different names. For example, in Kashmir she is worshipped as Amva, in the Deccan as Amvika, as Hingula and Rudrani in Gujrat, as Uma in Bihar and as Kanyakumari in Tamil Nadu. Celebrations outside Bengal are, however, on a minor note.

Durga does not belong to the Vedic pantheon, but is a later goddess. She is also known as Adyashakti, Mahamaya, Shivani, Bhavani, Dashabhuja, Singhavahana etc. The goddess came to be known as Durga after killing a demon named Durgo or Durgam. She is also called Durga because she brings an end to all forms of misery. 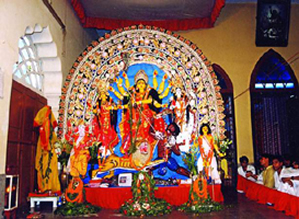 The best known story of Durga is that of her defeating the demon Mahisasur, who could not be killed by any male because of a blessing he had received from brahma. Knowing that the gods could not renege on the boon they had granted, Mahisasur fought the gods and threw them out of their abode. The gods and goddesses appealed to vishnu for help. On Vishnu's advice, each god gave up one of his qualities and weapons to Durga. Armed with their weapons and imbued with their qualities, Durga fought and killed Mahisasur. Consequently she is also known as Mahisamardini. There are detailed discussions about Durga in Kalivilasatantra, Kalikapurana, Devibhagavata, Mahabhagavata, Vrhannandikeshvarapurana, Durgabhaktitarabgini, Durgotsavaviveka, Durgotsavatattva.

There are two pujas associated with Durga: Basanti Puja in spring (basanta), and Sharadiya Puja in autumn (sharat). Basanti Puja is performed in the first fortnight of Chaitra (March-April) and Saradiya Puja in the first fortnight of Aswin or Kartik (October-November). The origins of Basanti Puja date back to the time of King Surath, who had lost his kingdom. Advised by a wise man to worship Durga, he did so and had his kingdom restored. Saradiya Puja derives from a worship of the goddess arranged by ramachandra in autumn.

Invoking the goddess' blessings in his fight against Ravana, Ramachandra arranged a worship of the goddess in autumn. Since then this puja has been known as akalvodhan (untimely invocation) or Saradiya Durga Puja. Nowadays Basanti Puja is rarely performed, and Durga Puja has become synonymous with Saradiya Puja.

On the occasion of Durga Puja, the goddess is invoked on the sasthi, sixth day, of Aswin or Kartik. Puja is offered on the shaptami, astami, navami or mahanavami, the seventh, eighth and ninth days. The image of the goddess is immersed in water on the dashami, tenth day. Preparation for the immersion of the Durga images start on the morning of dashami, but the immersions actually take place in the evening. Long processions of devotees carry the images of the goddess from various puja pandals to nearby ponds, canals, rivers etc, where they are immersed. The dashohara mela is held on this day. Wearing new dresses, members of the Hindu community congregate at the fair. Everyone exchanges greetings, and the young visit their elders to seek their blessings. Boat races are a special attraction of the fair.

There are three kinds of Durga Puja: a) Sattvik (esoteric), which includes meditation, yavja (elaborate rites during which mantras are chanted) and offerings of vegetarian dishes; b) Tamasik (unenlightened), which is meant for people of lower castes, during which there is no meditation, but which includes the recital of mantras and during which wine and meat are served; c) Rajasik (imperial), during which an animal is sacrificed and offerings made of non-vegetarian dishes. The recommended sacrificial animals are goat, lamb, buffalo, deer, pig, rhinoceros, tiger, iguana, tortoise, fowl. Some scriptures even recommend human sacrifice.

The goddess Durga is usually depicted with ten hands, though she may also be represented with four, eight, sixteen, eighteen or twenty hands. On the occasion of Durga Puja, images of the goddess are made of straw and clay. The images are then painted, either light golden, bright gold or red. In the past a few families, including the Tagore family of Jorasanko, used to attire the icon in costly saris and adorn it with gold ornaments before immersing it with all its finery. Puja is at times performed without an image of the goddess but with a durpun (a shiny, reflective metal piece, usually of brass) or with a book, a picture, a trishul (trident), arrow, kharga (falchion).

Durga Puja celebrations are believed by some to have been introduced into Bengal by Kangsanarayan, Raja of Tahirpur in rajshahi district during the reign of Emperor akbar (1556-1605). Others believe that krishnachandra roy (1710-1783), Raja of nadia, popularised these celebrations.

However, the detailed descriptions of Durga Puja celebrations in Durgotsavanirnaya by jimutavahana (c 1050-1150), Durgabhaktitarabgini by vidyapati (1374-1460), Durgotsavaviveka by shulapani (1375-1460), Ramayana by krittivas ojha (c 1381-1461), Kriyachintamani by Vachaspati Mishra (1425-1428), Tithitattva by raghunandan bhattacharya (15-16 century) suggest that this festival was celebrated in Bengal as early as the 10th century. However, elaborate Durga Puja celebrations are of a later date and may well be the contribution of Kangsanarayan or Krishnachandra. By the end of the 18th century, Europeans used to participate in the puja festivities. Baijees (accomplished singer-dancers) used to perform at the residences of the rich. jatra, panchali, and kavigan were arranged in some places.

Durga Puja is celebrated all over Bangladesh. Some perform it individually, some collectively. Collective puja is called baroyari or sarvajanin (open to all). People of all castes can participate in Durga Puja. A sarvajanin Durga Puja is celebrated at dhakeswari temple in dhaka. It is also celebrated in more than a hundred temples in the city. The puja celebrations at the ramakrishna mission, Dhaka, and Jagannath Hall of the university of dhaka are also famous. In Dhaka the Durga images are carried to the buriganga to be immersed. On the occasion, food and clothes are distributed among the poor.

kumari (virgin) puja forms part of the Durga Puja celebrations and is observed on the astami, or eighth day. On this occasion, a young girl of eight or nine years is dressed like Durga and worshipped as a living replica of the goddess. Dasami, the tenth and final day, is a public holiday. Newspapers bring out special supplements and the radio and television channels arrange special programmes on the occasion. [Dulal Bhowmik]