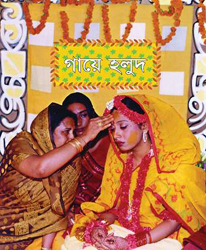 Gaye Halud (literally, turmeric-smeared body) an important part of the marriage rituals in Bangladesh, is a beautifying and blessing ceremony that has been observed since ancient times. Newlyweds are believed to be vulnerable to misfortune and the evil eye. Hence, various types of rituals, including the gaye halud ceremony, are observed in order to give protection to the bride and bridegroom. In Hindu society this ceremony is known as gatra haridra or adhivas and dates back to Vedic times. Muslims refer to it as gaye halud, haldi kota, tilwayi, kud deoya, etc. Though Muslims from Persia, Arabia, Turkestan brought with them their own marriage rituals, they adapted many local customs and rituals including gaye halud.

Smearing the bodies of the bride and the bridegroom with turmeric and other cleansing or sweet smelling ingredients three, five or seven days before the marriage ceremony is the main ritual of gaye halud.

Turmeric is considered antiseptic and purifying. It is also a cosmetic, lending a golden glow to the dark Bengali skin. It is also traditionally believed to provide protection against evil spirits. Besides turmeric paste, some other ingredients are also used in this ceremony: paddy, durva (a kind of grass), sesame, barley-corn, mustard seed, dried ginger, sandalwood, vermilion, henna, various kinds of seeds, sweets, fish and a lamp with five wicks etc. It is believed that these will bring good fortune and fertility.The gaye halud ceremony is observed separately in the houses of the bride and the bridegroom. The ceremonial ingredients are sent from one house to the other in a grand manner. Decorated stages are made for seating the bride and bridegroom.

All the ingredients are put on colourfully decorated bamboo trays for performing the ceremonial rites. The mother, grandmother and other elderly relatives apply a dab of turmeric on the bride/ bridegroom and offer sweets. Younger relatives and friends then take turns to apply turmeric. Guests are entertained with special food and sweets, including various types of pithas (rice cakes). Music plays an important part on this occasion, with women and girls singing songs, commonly known as meyeli git, often composed especially for this ceremony. The traditional songs reflect the significance of marriage rituals and the picture of a happy family. The songs which are made up for the occasion make fun of the members of the other party. Thus the groom's side will make fun of the members of the bride's family and vice versa. After the ceremony is over, the bride traditionally continues to be rubbed with turmeric paste until the day of the wedding, when she takes a ritual bath.

In the recent past, relatives and friends, wearing old clothes, would smear each other with turmeric paste in fun as well as splash colour on each other. However, the ceremony at present has become an occasion for dressing up, and the meyeli git, in cities, has been displaced by modern film songs and band shows. [Shahida Akhter]