Jalalabad Thana (Sylhet metropolitan) area 133.36 km, located in between 24°53' and 25°01' north latitudes and in between 91°42' and 91°52' east longitudes. It is bounded by companiganj and gowainghat upailas on the north, kotwali model and moglabazar thanas and bishwanath upazila on the south, bimanbandar thana and Gowainghat upazila on the east, chhatak and Bishwanath upazilas on the west. 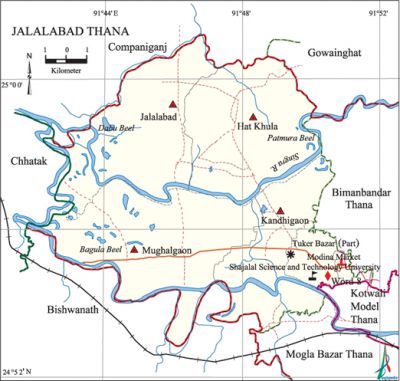 Hats, bazars and fairs Hats and bazars are 13; most noted of which are Tuker Bazar, Madina Market.