Jhalokati District (barisal division) area 758.06 sq km, located in between 22°20' and 22°47' north latitudes and in between 90°01' and 90°23' east longitudes. It is bounded by barisal district on the north and east, pirojpur district on the west, barguna district and bishkhali river on the south.

Administration Jhalokathi Sub-division was formed in 1972 and it was turned into a district in 1984. Of the four upazilas of the district nalchity is the largest (237.17 sq km, it occupies 31.3% of the total area of the district) and kanthalia is the smallest upazila (152.08 sq km). 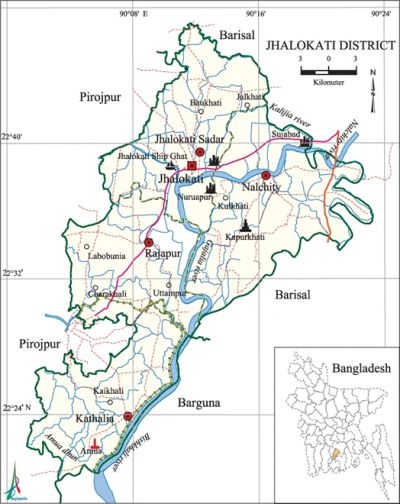 History of the War of Liberation The Pak army started indiscriminate killing, plundering and raping' in diferrent places of Jhalokati sadar upazila immediately after their entry on 27 April 1971; they also set many houses on fire. On 5 May, 21 Pak soldiers including a few razakars were killed in encounters with the Sarvahara Party of Siraj Sikder at Madra, Bhimrul and Peara Bagan. The Pak army shot 9 persons dead in Nalchhity upazila on 13 May. On 23 May the Pak army killed 23 pious Muslims at Ramanathpur Sharif Bari while they were onprayer. Besides, the Pak army in collaboration with the razakars, captured and later on killed 24 members of the Manik Bahini on 16 June. An encounter between the freedom fighters and the Pak army was held on 21 October at the premises of the Rajapur Police Station in which three freedom fighters were killed and so were 8 Pak soldiers. On 13 November, 18 Pak soldiers incuding 2nd Lt. Ajmat were killed in an encounter with the freedom fighters at Chachair and Premdaha. Jhalokati was liberated on 8 December.

Folk culture Various types of folk songs such as Bhatiyali, Dhuyagan, Lokageeti, Baramasi gan, Kavigan, Kirtan, Jarigan, Chhad Petanor gan (songs sung at the time of levelling and casting of roof) are noted. Besides, various types of dances including the Kathak Dance are also performed in the district. [Humayun Rahman]