Administration Karimganj Thana was formed in 1909 and it was turned into an upazila in 1983.

Historical events Isa Khan, chief of the Bara Bhuiyans, surprised Jangalbari and occupied it defeating the Koch King Laksman Hajo. Isa Khan established his residence at Jangalbari. During the war of liberation in 1971, encounters were held between the freedom fighters and the Pak army at different places like Kajla, Aiela, Sakura, Baliabari. Karimganj was liberated on 16 December. 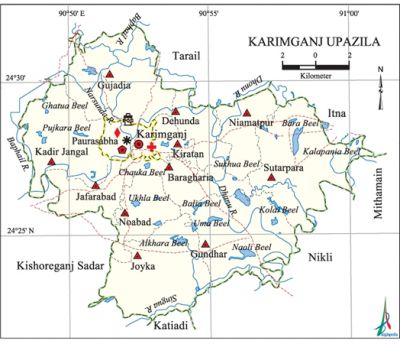 Hats, bazars and fairs Hats and bazars are 38, fairs 10, most noted of which are Karimganj Bazar, Babur Hat, Marichakhali Hat, Murikandhi Hat.

Natural disasters The floods of 1974, 1998 and 2004 caused heavy damages to settlements, livestock and other properties of the upazila.