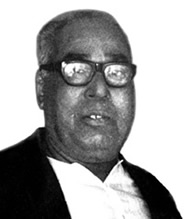 Khan, Ataur Rahman (1907-1991) lawyer, politician. Ataur Rahman Khan was born on 1 July 1907 at village Balia under Dhamrai thana of Dhaka district. He passed Matriculation examination in 1924 from Pogose School in Dhaka, FA examination in 1927 from Jagannath College, and obtained BA (Hons) degree in Economics from the Dhaka University in 1930. Having obtained his B.L degree in 1936 from the Dhaka University he joined the Dhaka district bar in 1937. Ataur Rahman Khan joined the judicial service as a munseef in 1942, but after two years he left the job to return to the bar (1944).

Ataur Rahman Khan began his career in politics as an activist of the Krishak Praja Samiti. He was secretary of the Dhaka district unit of the party in 1934-35 AD. He joined the muslim league in 1944, and was a member of the Dhaka district working committee and vice president of the Manikganj sub-divisional unit committee of the party. Ataur Rahman had played a substantial role in floating the Awami Muslim League (1949), and had been the vice president of the party since its inception  till 1964.

As a member of the Sarbadaliya Rastrabhasa Karma-parisad (30 January 1952) he played a vital role in piloting the language movement, and was later elected convenor of the reconstituted working committee in March 1952.

Ataur Rahman Khan became the Chief Minister of East Pakistan in September 1956 and continued to hold this position till the promulgation of martial law in the country in 1958. In 1960, EBDO was imposed upon him by the military government. As one of the leaders of National Democratic Front (NDF) formed under the leadership of huseyn shaheed suhrawardy in 1962 he played a vital role in the movement for the restoration of democracy in the country. He was elected president of the Dhaka High Court Bar Association in 1969 and a member of the Bar Council in 1970. Ataur Rahman Khan floated a new political party styled as Jatiya League in 1969, and was elected its president. He contested in the National Assembly election in 1970, but was defeated.

During the war of liberation in 1971 Ataur Rahman Khan was arrested by the Pakistan occupation army, and was however released in September after confinement for five months. Ataur Rahman was elected a member of the Jatiya Sangsad in 1973. He joined the Bangladesh Krishak-Sramik Awami League (BAKSAL) in 1975, and was made a member of its central committee. After the fall of BAKSAL Ataur Rahman revived his party Jatiya League in 1976. He was elected a member of the Jatiya Sangsad in 1979. Under his leadership the Jatiya League as a member of the seven party alliance took active part in the movement against the military rule of General Hussein Muhammad Ershad. Later he joined the cabinet of General Ershad, and was made the Prime Minister in March 1984 which office he held till 1 January 1985.