Khan Jahan's Tomb, Bagerhat stands on a high artificial mound on the northern bank of the so-called Thakurdighi and is surrounded by an outer wall of 67.1 m from east to west and 64.7m from north to south. It is popularly called the dargah complex of khan jahan. The complex consists of the square tomb building of Khan Jahan himself; a sarcophagus of Muhammad Tahir, his diwan; a single-domed mosque and the so-called kitchen. An intermediate wall encircles the tomb of Khan Jahan and the sarcophagus of his diwan. 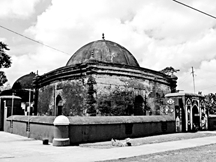 The Tomb of Khan Jahan, measuring 13.7m a side externally and 9.1m internally, is a brick-built square building and forms the nucleus of the complex. The four exterior angles of the building are emphasised with solid circular towers.

The four walls, with a thickness of 2.4m, have stone casings up to the height of about 0.9m-a technique, which was no doubt introduced with a view to preventing the building from being affected, by the ground moisture so common in the humid climate of south Bengal.

The interior of the building could originally be entered through four axial archways fitted with stone lintels, but the northern one is now closed with brick fillings. The large hemispherical brick dome, which covers the entire building, is internally carried on squinches springing from the stone brackets projected out of the walls. The triple cornice bands, running round the corner towers, are curved in a manner typical of the Bengali style.

The sarcophagus, beneath which lie the mortal remains of Khan Jahan, occupies the centre of the floor. It consists of four stepped terraces diminishing upwards and a top designed in the simple pointed barrel form. The three upper terraces of stone are covered with pious expressions in Arabic and Persian, but much of them are now illegible. The two brick-made lower terraces of the sarcophagus and the entire floor are enriched with polychrome encaustic tiles of square and hexagonal designs. Unfortunately, the glazed coatings of many of the tiles have already disappeared due to constant use by visitors.

An inscription on the tombstone records the death of Khan Jahan on 27 Zilhajj 863 AH (25 October 1459 AD). Apparently, Khan Jahan had probably constructed the building before his death.

The building is now well preserved because of a series of restoration work done to it over the years by India, Pakistan and Bangladesh archaeology Departments. In many of its features, such as the square plan, the Firozian combination of arch and lintel, the curvature of the cornices, the flanking corner towers divided by moulded bands, and the squinches for the support of the dome, the building is a reproduction of the eklakhi mausoleum (early 15th century) at Hazrat pandua. But unlike the octagonal interior of the Eklakhi Mausolium, the present tomb, for the first time in Bengal, is square both internally and externally.

This practice, from this point onward was to be found to appear repeatedly in almost all single-domed buildings in Bengal. Unlike the usual octagonal corner towers of Bengali monuments, the corner towers of the present tomb as well as that of all buildings ascribed to Khan Jahan are circular. The circular shape of the corner towers, the bare surface of the walls, and the combination of arch and lintel construction are very similar to the Tughlaq architecture of Delhi. Relying on these Tughlaqian elements in Khan Jahani monuments, some scholars have tried to trace their origins back to Delhi. But it is very likely that the immigrant artists, who perhaps came and settled here during firuz shah tughlaq's Bengal expedition and the sack of Delhi by Timur in 1398, introduced these Tughlaqian elements in Bengal architecture.

The Tomb of Muhammad Tahir' is just to the west of Khan Jahan's mausoleum. It is merely a cenotaph formed of three stepped terraces of stone. One of the inscriptions on the top terrace records the death of Muhammad Tahir in the month of Zilhajj 863 AH (1459 AD). Local legends indicate that Muhammed Tahir was a favourite high official of Khan Jahan. The location of his tomb beside that of Khan Jahan reinforces this belief.

Mosque' The single-domed mosque is the western most building of the complex. It is brick-built, square in plan with three archways in the east and one on each of the north and south sides. The northern and southern archways are now closed. The qibla wall is internally recessed with a semi-circular mihrab corresponding to the central archway in the east. The four corner towers on the exterior angles are circular and the cornices are curved. The hemispherical brick dome that covers the single square room of the building is carried on squinches rising from the stone brackets. In plan and constructional details the mosque seems to be a replica of Khan Jahan's tomb. It can therefore be conjectured that it was built at the same time as the tomb ie mid-15th century.

The so-called kitchen' building, now leveled to the ground, was in quite well preserved condition when the author visited the site in the 1970s. At that time the four walls were found intact and the roof, which was of the chau-chala vaulted type, was in a damaged condition. There were three arched openings on the west wall and one each on the north and south walls. The inner side of the eastern wall had several shelves.

It was a rectangular structure of 12.2m by 8.5m with circular towers on the exterior angles. What the building was actually intended for is not known. A local tradition relates that in the last years of his life Khan Jahan dwelt in the building, where he now lies buried, and used the adjacent building as his kitchen. About a century back the building was known to have been used for the same purpose by two Faqirs, who then looked after the mosque and the tomb. [MA Bari]