Majhee (boatman) a traditional occupational group earning livelihood from operating boat in rivers, rivulets, and other water reservoirs such as beels, jheels, haors, and baors. Socially Majhees constitute a special caste in the Hindu society and a distinct social category in the Muslim society.

Since it is a country abounding in rivers and rivulets, Bangladesh has a huge boat traffic. People who run boats are given different popular names in different parts of the country and it is difficult to distinguish between them in terms of their activities, lifestyle and culture. Popular synonyms for the word majhee in Bengali include mallah, nawa, nowkajibi, nowkachalak, kandari, patni, karnadhar etc. 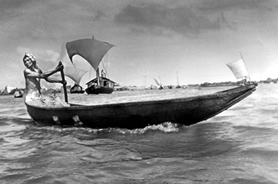 There are various kinds of boats for transportation of passengers and freight. Passenger boats might be tiny or large and contain one or two majhees. On the other hand, freight boats are relatively large and essentially require more than two majhees.

In the past, a majhee was a permanent employee of rich families whose members used to travel in boats. Although principally employed in river services, many majhees adopt fishing as their secondary source of livelihood. Boats used by majhees are of different kinds.'

At present, mechanised boats have largely replaced traditional boats. A recent phenomenon is the fixing of motor engines to boats enabling them to be made larger to accommodate more people and also to gain in speed. Traditional majhees are thus turning into drivers of engine boats. But in general, the squeeze in waterways throughout the country forces most majhees to leave the profession and accept other occupations including agriculture, fishing, and diving. [S M Mahfuzur Rahman]