Administration Nabinagar Thana was turned into an upazila on 24 March 1983. 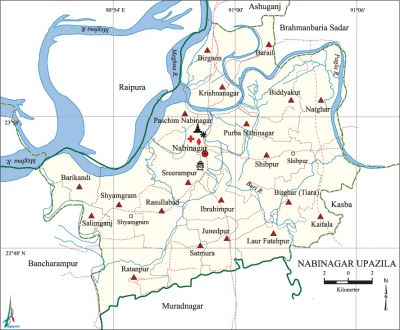 Marks of the War of Liberation Mass grave 3 (Kharghar, adjacent to North-West corner of the Nabinagar Pilot High School playground, South side of Thana Compound at Nabinagar).

Natural disasters The floods of 1988 and 2004 caused heavy damages to crops and livestock of the upazila. About 2500 people were victims when two passenger motor launches were sunk in the Meghna due to devastating tornado of 1 May 2001.