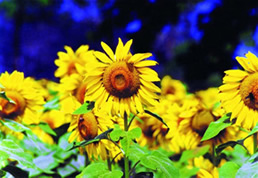 Oil Plant any of several plants, the seeds of which yield oil. The edible oil-producing plants constitute the second major agricultural crop in Bangladesh, next to the food grain. Vegetable or plant oils are usually classified into two major groups depending on their behaviour of heating: volatile or essential oils, and non-volatile or fatty oils. Volatile oils are produced from different aromatic plant species, belonging to different plant families mainly Lauraceae, Myrtaceae, Umbelliferae, Labiatae, Compositae, etc. 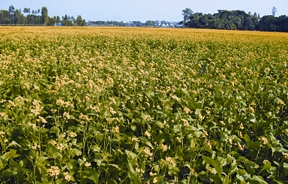 Most of the volatile oils are used for manufacturing perfume and other scented items. Non-volatile or fatty oils are consumed and used by human beings in different ways. Fatty oils are stored up, often in large amount, in seeds (40-60%) and to a less extent in fruits, tubers, stems, leaves, and in other organs.

The national estimates of acreages and production of major oil seeds during 1997-98 are shown in Table 3.

Although widely cultivated in different districts of the country, the annual production of oil seeds is far below the domestic need. [Md. Mahfuzur Rahman]

Of all the pests infesting the oil seed crops mustard aphid, L. erysimi and Til hawk moth, A. styx under favourable conditions cause heavy damage to the growing crops. [M Ibrahim Ali]

Diseases Some common diseases of oilseed crops are mentioned below:

Mustard White rust caused by the fungus Albugo candida is a common disease that affects the aerial part of the plant. Lesions are visible on the leaves and stem as white or creamy-yellow small spots. Usually, leaf spots appear on the lower surface; in severe infection they are found on both surfaces.

Alternaria leaf spot or blight caused by Alternaria brassicae and A. bracissicola is one of the most widespread and serious diseases of mustard prevalent in different areas of Bangladesh. The round leaf spots produced initially are small. Soon the spots enlarge and may attain a size of about one cm in diameter. Usually lower leaves are affected.

Groundnut Tikka disease, caused by two fungal pathogens, Cercospora personata and C. arachidicola, is a major groundnut disease in Bangladesh. Both the pathogens producing spots may occur on the same leaf but may show some difference in symptoms. The leaf spots produced by C. personata are circular, about 3-8 mm in diameter, and appear at late growth stages. The lesions are usually dark brown to black and appear on both the surfaces of the leaf. On the other hand, leaf spots produced by C. arachidicola usually appear at the early growth stage of the plant and are characterized by a brown-red, irregularly circular spot with a yellow halo. Spots produced by either pathogen may be found on leaflets, petioles and stems. High relative humidity, temperature, and close planting favour the development of the disease.

Southern blight of groundnut caused by Sclerotium rolfsii is a common disease throughout the world. The fungus is responsible for light brown decay at the basal region of the plants with characteristic presence of whitish and cottony growth of the fungal mycelium intermingled with mustard seed like sclerotia.

Soybean Anthracnose, a major disease of soybean is caused by Colletotrichum dematium var. truncata. Symptoms are usually evident during the pod setting to maturation stages of growth. Any aerial parts of the plant, including pods and pedicles, are susceptible to the pathogen. Symptoms include grayish to reddish brown blotches. The fungus is seed borne.

Pod and stem blight of soybean is caused by Phomopsis sojai. Any aerial part and roots are susceptible to the disease. Symptoms on the stems and pods appear as pimple-like spore bearing pycnidia on the surface.

Brown spot of soybean caused by Septoria glycines usually causes brown, angular, or to some extent circular leaf spots with yellow halo surrounding each. The spots may coalesce to cover larger areas resulting in premature fall of the leaves. Stem, pods and seeds may also be affected.

Flax (Linseed) Rust is a very common disease of linseed. The pathogen, Melamspora lini causes bright orange coloured uredosori on any aerial part of the plant. With the advancement of the disease, the colour of the sori turns black. The leaves may die prematurely. Fusarium oxysporum is responsible for root rot, damping off, or wilt at any stage of plant growth. Brown streaks of mycelium may develop, clogging the vascular tissue of the stem. [Abul Khair]