Administration Pakundia Thana was formed in 1922 and it was turned into an upazila on 14 September 1983. 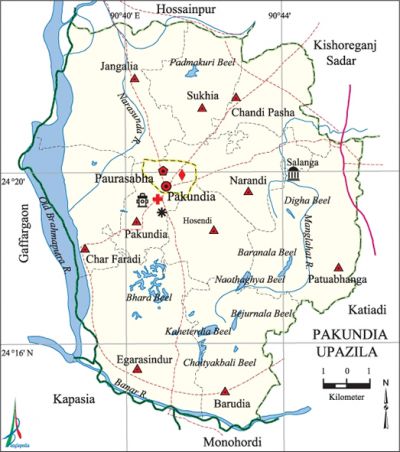 History of the War of Liberation Direct encounters between the freedom fighters and the Pak army were held in different places of the upazila including Tarakandi, Kodalia and Kaliachapra. The Pak army, in collaboration with their local agents (razakars and dalals) killed about 200 people of the upazila and buried them in a mass grave at a place adjacent to the present BADC building. Freedom Fighter Badiul Alam was awarded the title of 'Bir Bikram' for his heroic role in the war of liberation. Pakundia was liberated in December.

Hats, bazars and fairs Hats and bazars are 24, fair 1, most noted of which are Pakundia Bazar and Kodalia Mela.