Administration Monohardi Thana, now an upazila, was formed in 1904. 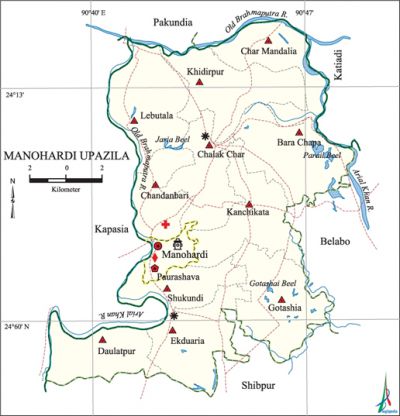 Historical events During the mass upsurge, the police opened fire on the agitated general public who were picketing and organizing processions at Hatirdia Bazar (during hartal) on 29 December 1968 killing five persons and wounding many. During the war of liberation in 1971 the freedom fighters launched a surprise attack on the Pak army stationed at the Monohardi High School Camp in which 5 Pak soldiers were killed; the freedom fighters also kept the camp under their control for some time. In the middle of August an encounter between the freedom fighters and the Pak army was held at village Doshdona under Shukundi union in which 4 Pak soldiers were killed. As a retaliation the Pak army sacked the whole village the following day.