Pala Sculpture During more than four hundred years of Pala rule (8th-12th century AD), many centres of sculptural art flourished simultaneously in different regions of the extensive empire of Bengal and Bihar. The products of these centres were not only varied but also numerous. Thousands of sculptures of this period have been discovered and they now form part of the collections of a number of museums in Bangladesh and India. Many of them have also found their ways into a number of museums in Europe and America. 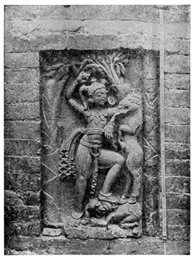 Pala sculpture derives its origins from the late Gupta style, but later on deviated from it. One of the main reasons of this deviation was the fusion of classical mannerism with the indigenous style of Bengal. The mixed style that was an experiment in the mid-7th century continued through the 8th century and culminated in a specialized idiom of art in the early 9th century. As the sculpture derived its strength and inspiration chiefly from the exigencies of religious need, they exhibited a sincere reflection of the idea of beauty and physical charm laid down in religious texts. The figure in any image, whether male or female, combined spiritual and mundane suggestions. All the figures, whether female or male, are marked by sensuousness. The female figures of the period thus invariably have heavy round breasts and bulging hips. This overemphasis on female sensuousness is balanced in the male figures as their broad shoulders gradually attenuate to a narrow waist accentuating the their masculinity and are equally suggestive.

The largest concentration of early Pala sculptures can be seen in Paharpur of Naogaon district. As many as 63 stone sculptures were found in situ at the basement wall of the central temple of the famous somapura mahavihara built by dharmapala. Except for half a dozen of nicely carved sculptures and another dozen or so independent representations of Hindu divinities, the main characteristic of majority of the sculptures is their free and lovely movement. They are crudely executed and seem to have originated from an indigenous trend. They are almost of the same size and executed in grayish or white spotted sandstone. In subject matter and plastic quality they are akin to the huge number of terracotta plaques that decorate the facades of temple walls.

A few exceptionally well carved reliefs such as Krishna killing Kesin, Krishna uprooting the twin Arjuna trees, and a young woman identified by some scholars as a celestial dancer are not only of pleasing quality but also remarkable for their expressiveness, lively action, and dynamic movement. Among the independent representations of divinities, which are marked by a comparative heaviness throughout, an image of Padmapani, fixed in the middle of the southern basement wall of the temple, seems to be specially made for the temple. The sculpture also clearly shows an advance in style over the other specimens. 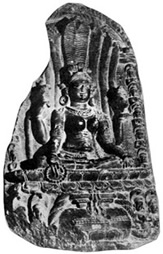 An image of Hari-Hara from Burdwan, now in the Asutosh Museum, Calcutta is a noteworthy example of early Pala sculpture. From the stylistic point of view, it is similar to an image of Surya recovered from Surjan Giri, Barabar Hills, Gaya (Bihar) which is dated to late 8th century AD. A number of sculptures discovered from the northern region of Bangladesh have been traced to the late 8th century. Among these, Garudasana Vishnu from Agradigun, now in the Asutosh Museum, Calcutta is remarkable. The sculpture is identical in style to a figure of Vishnu from Bodh Gaya, now in the Bodh Gaya Museum, Bihar. The images in these sculptures exhibit the same stockiness of body form and similar ornamentation. The stele with rounded top is almost free from decoration except for the rim.

The stylistic qualities of late 8th century sculptures were retained to a great extent in the 9th century sculptures. The general tendency is one of the fullness of figures. The images, mostly carved in black stone, are modeled in a delicate manner so as to give the impression of soft-textured flesh and skin. The dated sculptures of the 9th century include an image of Surya on the Bodh-Gaya lintel dated to the 26th regnal year of Dharmapala, a miniature Vishnu, and a image of Buddha taming the Elephant from the reign of Vigrahapala.

Among other well-known sculptures of the 9th century, mention may be made of the stone image of Tara from Sukhabashpur, Dhaka, and of Buddha from the Comilla region now in the bangladesh national museum (Dhaka), the stone image of Surya in the Rajshahi Museum, and of Vishnu from Mangalbari, Dinajpur.

All the 10th century sculptures mentioned above clearly show that the characteristics of 9th century sculptures have been retained in them to a great extent. All the male figures have massive body forms, shaped with a disciplined vigour that shows conscious strength that seems to swell the outline of the figure from within. Almost all the specimens are moulded in high relief. Some of the images of the period show a tendency for elongation of the body and of the limbs. The elongated body form is more evident in the large torso of a bronze image of Buddha discovered in a damaged condition from cell No. 37 of the Paharpur monastery in 1982.

Towards the close of the 10th century, the first renaissance of the Bengal School of Art took place when Mahipala I succeeded in establishing the second Pala empire. At this point the artists of Bengal broke away from the shared traditions with Magadha. The revival of political power led to renewed artistic activities and the tempo was maintained throughout the 11th century.

Although, ancient vikramapura near Dhaka and the other art centres of south-east Bengal were very active, the finest specimens of 11th century Pala sculptures were created by the artists of north Bengal. The most interesting point to note in this connection is that the number of Brahmanical sculptures produced increased during this century. Among the Buddhist images, the majority is of females. The art products of the renaissance in Bengal are marked by the complete assimilation of the different traits of the local plastic art. One of the early products of the renaissance is the stone image of Vishnu from Baghaura, mentioned above. This dated sculpture served as the stylistic index for the next two or three generations. 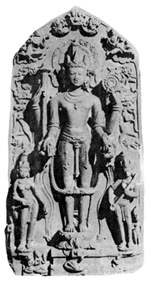 There are two other dated stone sculptures - Surya from Kulkarni, Faridpur, and Vishnu from Paikpara, Dhaka. In the light of these dated sculptures some undated specimens have been assigned to the 11th century AD. The first image of note is the stone image of Vishnu from north Bengal, which is now in the Indian Museum, Calcutta. Both iconographically and stylistically, this image is similar to the above-mentioned Vishnu image from Baghaura. In both images, the face is full of grace but the lower portion, particularly the legs, seems stiff and devoid of elasticity.

Some of the sculptures of the 11th century reveal a great advance in the elaboration of composition. The best example of such a sculpture is the stone image of Buddha from Sibbati, Bagerhat, now preserved in the Kamlapur Buddhist Monastery, Dhaka. In it one can see beside the figure of Buddha, shown seated on a full-blown lotus in the bhumisparsha mudra inside a shikhara temple, several other deities and incidents of Buddha's life, depicted in different registers. Only two other sculptures showing similar compositions are known. One was discovered from Bihar and is now in the Indian Museum, Calcutta, and the other was fished out from the Karnafuli river and is preserved in the Ratnakur Vihara at Betagi in Chittagong. 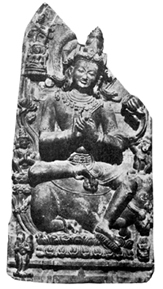 A fairly large number of 11th century sculptures depicting peculiar tantric Buddhist images such as Heruka, Marichi and Manjuvara etc have been discovered from various regions of Bangladesh and are now preserved in the National Museum, Dhaka; Mainamati Museum, Comilla; and the Rajshahi Museum. The black stone image of Sadaksari Lokeshvara from Niyamatpur, now in the Rajshahi Museum, is a remarkable piece of sculpture depicting a new type of Boddisattva.

However, the most interesting sculpture of the 11th century is the black stone image of Buddhisattva Manjushri, now in the Rajshahi Museum. The image apparently looks like the representation of Vishnu. It is fact that there are several examples of parallels and opposites in Indian iconography and in the anthropomorphic representations of these images. So the sculpture may be regarded as an example of a conscious attempt to produce a sculptural representation of a Buddhist deity parallel to that of a Brahmanical one, either with a view to bring harmony among the devotees of the two religions or to show the superiority of the Buddhist deity over the Brahmanical God.

Chaste and minute carvings are well-known characteristics of a number of 11th century sculptures depicting Hindu gods and goddesses. In this connection, special mention may be made of the stone image of Vishnu recovered from Sialdi, now in an American museum, and the stone image of Saraswati from Chhatiangram in Bogra, now in the Rajshahi Museum. Another remarkable piece of art from the same century is the six-handed stone image of Ganesha from north Bengal, now in the Indian Museum, Calcutta. Large size bronze sculptures of the 11th century, such as the Gaja-Lakshmi and Vishnu from Belamla, Bogra, now in the Rajshahi Museum, and Vishnu Trivikrama from Rangpur, now in the Indian Museum, Calcutta, are also remarkable for minute execution and finish.

Some of the famous 11th century sculptures probably belong to the period of the second revival of the artistic activity under Ramapala, the last powerful ruler of the Pala dynasty. As such, some of them have great similarities with the sculptures of the following century. In fact, a clear-cut division between the sculptures of these two centuries is difficult as the traditions of the 11th century continued well into the 12th century. Hence, except in the case of a few pieces, hundreds of uninscribed sculptures discovered in various sites of Bengal present a big problem for historians trying to date them accurately.

A number of Pala sculptures representing Buddhist gods and goddesses dated to the 12th century have been discovered from various regions of Bangladesh, but their number is insignificant in comparison to the overwhelming number of Brahmanical images, indicating that Buddhism as a religion was on the wane by this time.

It may by say that Pala sculpture began as a simple and genuine expression of religious experience. Although the figures in the early sculptures were heavy, they were easy moving and exhibit good modeling quality. In the 10th century, costumes and jewellery as well as the background decoration began to increase slowly. The figure became slightly elongated but due emphasis was paid on the plastic significance of the body form. The face was still full of expression and permeated with a clear repose of meditation. In the 11th century, however, increasing importance was given to vegetal decoration of the back slab, profuse ornamentation of the main figure, and minute execution of details.

The body form became over elongated, movement was affected, faces became pointed and were instilled with an expression of enjoyment, dress and jewellery became frivolous, and the pointed stele became overcrowded with a multitude of figures and elaborate decoration. Except for a few noble examples, however, the Pala sculptures of the late 11th and 12th century period are mostly stereotyped and may be regarded as products of a decadent phase. [Shamsul Alam]