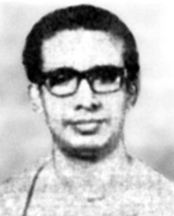 Pasha, Anwar (1928-1971) martyred intellectual and litterateur, was born on 15 April 1928 at Dabkai village in Murshidabad. His father, Haji Makrom Ali, was a local celebrity. After passing the High Madrassah examination in 1946, Anwar Pasha got MA in Bangla from Calcutta University in 1953. He started his teaching career as superintendent of Manikchak High Madrasah and later on taught at Bhabta Azizia High Madrasah (1954) and Sadikhan Diar Bohumukhi Higher Secondary School (1957). In 1958 he joined Pabna Edward College and then, in 1966, the Department of Bangla, Dhaka University.

Anwar Pasha made his debut as a writer while still a BA student with Hasnahena, a collection of literary essays. During the next two decades, he published novels, essays, poems, and short stories. He also edited four ancient and medieval Bangla poems in collaboration with Professor muhammad abdul hYE. His writings were published in many journals, including the quarterly Kavita, published from Kolkata and edited by buddhadev bose. His notable writings include Nadi Nihshesita Hale (1963), Nid Sandhani (1968), Nishuti Rater Gatha (1968), Nirupay Harini (1970), Rabindra Chhotagalpa Samiksa (Vol. I 1963, Vol. II 1973), Sahityashilpi Abul Fazal (1968) Rifle-Roti-Aorat (1973), Samudra Sabkhalata Ujjayini (1974). The novel Rifle-Roti-Aorat was based on the nine-month liberation war.

Anwar Pasha was a staunch supporter of the liberation war and he dreamt of an independent Bangladesh. Unfortunately, he could not see his dream realised, because, shortly before 16 December, he was picked up from his university flat, taken to Mirpur and killed brutally along with other intellectuals. His dead body was recovered and buried in the compound of the Dhaka University mosque. In 1972, Anwar Pasha was posthumously honoured with the Bangla Academy Award for his literary achievements. [Wakil Ahmed]