Saha, Meghnad (1893-1956) educationalist and scientist. He was born on 6 October 1893 at village Seoratoli in Talebabad Pargana of Dhaka district. Brought up in fairly straitened circumstances, Meghnad had his early schooling at his village school. In 1905 he was admitted to Dhaka Collegiate School. He was, however, forced to leave the school because of his participation in the swadeshi movement. 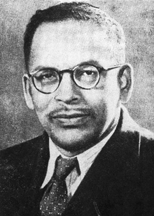 Meghnad Saha later joined Kishorilal Jubilee School. In 1909, he earned the distinction of securing highest marks in Bangla, Sanskrit, English and mathematics in the Entrance Examination. In that examination Saha stood first among East Bengal students and third among students from the whole of Bengal. He passed the ISc examination from dhaka college in 1911. Soon after, he went to Kolkata to enrol as a student at presidency college.

Here he had among his teachers Sir jagadis chandra bose, Sir achariya prafulla chandra ray, Prof DN Mallik and Prof CE Cullis. Though engaged in the study of mathematics, he came in contact with Prafulla Chandra Ray who was a professor of Physics. He graduated with an honours degree in Mathematics with the second position in the first class.

In 1916, Sir asutosh mookerjee appointed him as a Lecturer in the Department of Physics and Mixed Mathematics in the newly established College of Science in Calcutta. While serving in this college, he submitted a thesis for a doctorate to King's College. He received his Doctorate in 1919 and in the same year was awarded Premchand Roychand Scholarship for his thesis titled Selective Radiation Pressure and its Application to the Problems of Astrophysics. This thesis marked his entry into Astrophysics. The Premchand Roychand Scholarship and Guruprasanna Ghosh Scholarship enabled him to proceed to Europe in 1920. He conducted research for sometime at the Imperial College with Professor A. Fowler, successor to Norman Lockyer, and worked towards the publication of the most famous of his scientific works on 'Thermal Ionisation of Gases'. His theory gave a clear and precise explanation of the facts accumulated by Sir Lockyer and Professor Pickering of Harvard University Observatory, who examined the spectra of 200,000 stars and classified them into well-defined groups.

In 1921, Dr Saha went to Berlin to work at the laboratory of Professor W Nernst to verify his theory through experimentation. While engaged at work in Berlin he received an invitation from Professor Sommerfield of Munich to address the physicists there on his work. This was done in May 1921 and the lecture was published in the Zeitschrift fur Physik Vol 6. In Berlin, he became close to the great physicist Albert Einstein. About this time Sir Asutosh created a chair in Physics for him with the help of a donation from the Raja of Khaira and recalled him to Kolkata.

Calcutta University was then passing through a very critical stage. Dr Saha tried in vain to set up a laboratory where he could work further on the experimental verification of his theory. At last through the efforts of his friend Dr NR Dhar he received an appointment at Allahabad as Professor of Physics in October 1923. He devoted himself to the improvement of this department, and the reorganisation of its syllabus and research agenda.

In the meantime, his 'Ionisation Theory' gained new adherents. The first and foremost of them was Professor Henry Norriss Russell, professor of Astronomy at the Princeton University. With the requisite resources at his disposal, Prof Russell verified many of the predictions of Saha and carried out an important expansion of Saha's theory. Following Russell, two brilliant Cambridge graduates, RH Fowler and EA Milne, carried the theory still further and pointed out fresh applications for it. It was Alfred Fowler who proposed Saha's name in 1925 for Fellowship of the Royal Society, Dr Saha earned this distinction two years later. He was elected a life member of the Astronomical Society of France and was made a Foundation Fellow of the Institute of Physics in London. Alone or with his colleagues, he published many papers of great value and wide interest. His new theory of the 'Structure of Atoms' proved to be a major contribution to the study of physical phenomena.

During his fifteen years of stay in Allahabad (1923-1938) he built up a very active centre of research with the help of DS Kothari, RC Majumdar and PK Kichlu, among many others. But quite apart from his research interests during this period, Saha became deeply involved in the problem of organising scientists as a corporate body engaged not only in professional communication but in the more overtly political act of lobbying for resources and public support for scientific enterprises. Saha proposed the formation of an Indian Science Academy in 1934, which was to take over the functions of the Indian Science Congress Association. He proposed that such an organisation should try to induce the state to form a National Research Committee in which academies should have a fair representation. Saha's initiative resulted in the establishment of the National Institute of Sciences in India (later renamed the Indian National Science Academy) in Kolkata in 1935. In 1945 the headquarters of the institute was shifted to the Indian capital city of Delhi.

Between 1933 and 1935 Dr Saha was also responsible for founding two other scientific organisations, namely, the Indian Physical Society in 1933 and the Indian Science News Association in 1935. It was this news organisation which since the mid-1930s brought out the journal Science and Culture as an alternative political voice in the debates on national reconstruction and planning. Saha proposed application of science to the planning process. In doing this he shared the views of subhas chandra bose who in his famous London Thesis of 1930 called for inclusion of scientific expertise in the nation-building exercise. Saha became an important member of the National Planning Committee set up under the chairmanship of Pandit Jawaharlal Nehru in 1938.

In the meantime, he had returned to Kolkata from Allahabad and joined Calcutta University as Palit Professor in 1938. During his tenure at the university, important changes were introduced into the physics syllabus. Saha recognised the importance of the recently discovered nuclear fission of uranium in nuclear physics and for the utilisation of nuclear energy for industrial purposes. He introduced nuclear physics as a special subject in the MSc syllabus and attempted to build a special laboratory for nuclear physics. His single-handed efforts to establish a separate institute for nuclear physics led to its foundation in Kolkata being laid by Shyamaprosad Mookerjee in 1948 and the opening of the 'Institute of Nuclear Physics' by Mme Joliot Curie in 1951. After the death of Dr Saha, the research centre was renamed Saha Institute of Nuclear Physics.

In 1948 he was asked by the Government of India for opinion about establishment of an Atomic Energy Commission as proposed by yet another of India's great physicists Homi Bhaba. Saha opposed the proposal on the ground that India at that point did not have the necessary industrial base or the required manpower. The Government of India however went along with Bhaba's proposal and Saha found himself to be increasingly alienated from Pandit Nehru, the man he most admired. His interests in issues of both regional and national importance continued to find voice in his journal. Many of these were firmly placed in the political agenda of the new government. These included improvement of the Damodar Valley, recurring problems of drought and famine, organisation of science on a national basis, and development of hydraulic research as the first step towards realising the programmes of river valley development.

His political commitments led him to enter politics in 1951. He offered himself as an independent candidate for membership of the Indian parliament and won by large margin, defeating his nearest Congress candidate easily. At this point he was also involved in the relief and rehabilitation of millions of refugees who were forced to flee their homes following partition in 1947. He organised the Bengal Relief Committee to conduct this work on a systematic basis.

His academic interests widened too and took the form of his involvement in the Calendar Reform Project. In the ever-expanding range of his public and academic interests, Saha proved to be an indefatigable worker. After 1954 his health began to give way. On 16 February 1956, while on a visit to New Delhi in connection with a meeting of the Planning Commission, Professor Meghnad Saha passed away. [Madhumita Mazumdar and Masud Hasan Chowdhury]