Shilaidaha Kuthibadi a historic place associated with rabindranath tagore and a tourist spot. It stands on the south bank of the river Padma in Kumarkhali upazila in Kushtia district and is five miles north of the district headquarters across the river Gorai and opposite to the Pabna town on farther north across the Padma. Shilaidaha is also famous for the kachari (office) of the Birahimpur zamindari and the historic kuthibadi of the Tagore family of Jorasanko (Jorasanko kuthibadi). Shilaidaha is a relatively modern name; its old name was Khorshedpur. Before the Thakurs of Jorasanko acquired the village in the middle of the 19th century there stood an indigo-Kuthi reportedly built by a planter, named Shelly. A deep daha (whirlpool) was formed there at the confluence of the Gorai and the Padma, and hence the village came to be known as 'Shelly-daha', which ultimately took the form of 'Silaidaha'.

dwarkanath tagore, grandfather of Rabindranath Tagore, became the owner of this zamindari in 1807 by means of a will executed in his favour by Ramlochan Tagore. Rabindranath assumed the responsibility of looking after the zamindari and came to Shilaidaha for the first time in November 1889. 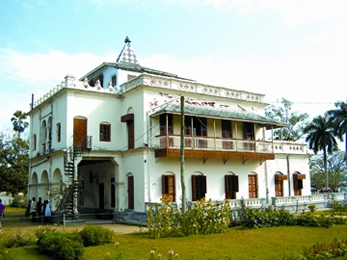 Rabindranath Tagore in his adolescence and even later occasionally stayed there during his periodic inspection of the zamindari estate. But later the Padma began to devour its banks during high flood close to the old Kuthibadi. Alarmed at the devastating erosion it was dismantled and its building materials were used for the erection of the new Kuthibadi. There the poet lived for more than a decade at irregular intervals between 1891 and 1901. During his stay there, eminent scientists, litterateurs and intelligentsia of Bengal such as Sir jagadish chandra bose, dwijendralal roy, pramatha chowdhury, mohitlal majumder, Lokendranath Palit visited him on various occasions. Sitting at his desk in the Kuthibadi or on a boat on the Padma, Rabindranath wrote a number of masterpieces: Sonar Tari, Chitra, Chaitali, Katha O Kahini, Ksanika, most of the poems of Naibedya and Kheya, and the songs of gitanjali and Gitimalya. It was here, in 1912, that the poet started his translation of Gitanjali into English, which earned him the Nobel Prize in 1913. Rabindranath had a deep attachment for Shilaidaha and the Padma, which is evident in his Chhinna Patrabali. The poet once wrote in a letter, 'The holy place of my literary pursuits during my youth and middle age was the village of Shilaidaha kissed by the waves of the Padma'.

Kuthibadi is a picturesque three-storied terraced bungalow, constructed with brick, timber, corrugated tin sheets and Raniganj tiles. Shilaidaha Kuthibadi is nestled within about eleven acres of beautiful orchards of mango, jackfruit and other evergreen trees, a flower garden and two ponds. Shilaidaha has an enchanting natural beauty and rural landscape. The Villa, enclosed within a boundary wall, is entered through a simple but attractive gateway on the south. It accommodates about 15 apartments of various sizes with a large central hall on the ground and the first floors. Each of the open terraces on the ground and the first floors is partly covered with a sloping roof of Raniganj tiles, while the central part over the ground floor has a pitched roof with gable ends. A short pyramidal crest farther variegates the roof over the second storey. Shilaidaha Kuthibadi is now a protected national monument where a Thakur Memorial Museum has been established by the government.

Rabindranath started his experimental work with village development and modern methods of cultivation at Shilaidaha, which he later undertook at patisar. He established a primary school there in the name of Pratima Devi, his daughter-in-law.

The birth and death anniversaries of the poet are observed at Shilaidaha on a national level on 25 Baishakh and 22 Shraban respectively. Many scholars from home and abroad attend these celebrations and take part in discussions on the life and works of Rabindranath. Cultural functions follow, during which prominent artistes present tagore songs. [Nazimuddin Ahmed and Ahmed Rafique]