Stupa a term used both in Pali and Sanskrit. The etymological meaning of the word is 'mound' or 'hillock'. In different South Asian countries it is called 'Chedi' which is synonimous with the Pali word 'chaitya'. In Sri Lanka it is called 'Dagoba' (synonym of Sanskrit word 'Dhatu') or 'Tope' (synonym of Hindi word Top or Chura). In Chinese, it is called 'Pagoda'. 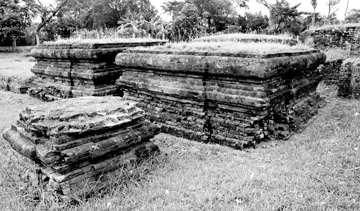 The Jains had the practice of building stupas. In the Vedic era, stupas were normally built on the mortal remains of the deceased, in the crematorium. Stupa is a sacred architectural structure in Buddhist order. Buddhist stupa is regarded as the oldest religious form of architecture; and also as the symbol of the enlightenend mind of Buddha and the way to internalise it. In Buddhism, stupa represents the body of Goutam Buddha, his' words and his soul. According to the anthology titled, Mohaporinirban Sutra of Buddhist literature Dirghanikaya, gautam buddha, at the time of his mohaporinirban (death), hinted to his disciple Ananda at building a stupa on his ashes. Buddha directed that stupa might be built on the graves of four Buddhas i.e. Buddha, Pachchek Buddha and over the graves of Arhath and Chakraborti Raja. He also said, the stupas should be placed at the intersection of four pathways. Ancient books of Buddhism bear the testimony that the ashes of Goutam Buddha were divided into eight parts and distributed among eight localities; hence a stupa was built in each of them. However, these stupas could not be identified.

The stupas built during emperor Ashoka are regarded as the oldest among the ones discovered till date. It is said that in the 3rd centruy BC, Ashok unearthed ashes from the initial stupas and distributed the ashes through building some thousand stupas across the Indian subcontinent to heighten the image of Buddhism and to give it a permanent imagery. Chinese explorer hiuen tsang gave description' about these types of stupa and stambha (pillar) in his travelogue. In course of time, the eight places of the initial stupas became important and sacred places to the followers of Buddhism, thus places of funeral and devotional offering. With this, changes were taking place with the rituals of Buddhism. Starting with the 1st century BC, the stupas became unified with the hall of Chaitya.

As time passed by, stupa became the symbol of Buddha and Buddhism and thus an object of worship. Along with this, Buddhist devotees used to build small and large stupas as their offerings while worshipping at the places of pilgrims. This kind of stupa was called Nibedan stupa.

During the reign of Sunga dynasty (185-75 BC) the main building material of stupa was stone. The moon-shaped hemispherical Sunga dynastic Satchi stupa (it is located 46 km north east of Bhopal, and 10 km from Besnagar and Vidisha in the central part of the state of Madhya Pradesh.) was built with stone in 2nd century BC. It is considered to be the oldest among the stupas that exist in good shape till date. The stupa inside the shell of the Dharmarajik stupa of Sarnath in North India is one of the thousands of stupas that were built by Ashoka. It was built with bricks.

In the early days, the stupas were like half-moon shaped mound or hillocks. This part used to be called 'Aundo'. During Sunga dynasty, not only stone was used in building the stupas but also the shape of Aundo changed to a hemisphere. A low-height platform was added under the Aundo. An altar was also placed on top of the Aundo. There would be a pole in the middle of the altar, which was called 'Yusthi'. Discs would be worn around the pole ' starting with the small ones at the top and large ones at the bottom. These discs together would be called 'Chhotrabali' and, along with the Yusthi would look like a needle-peaked turret. In course of time, the height of the platform, Aundo and the number of discs around the Yusthi increased. The stupas built around 8th-9th century AD became comparable to' pointed columns.

Based on the archeological discoveries and evidences, it may be said that stupas, as earlier examples of Buddhist architecture in Bengal, became wide-spread during the Mouryan era. The stupas found in Bengal are mostly small in size. Probably the stupa made with bronze or mixed-metals, found alongwith the Tamroxashon (copperplates) of King Devakharaga in the Ashrafpur village under Narsingdi district is the oldest example of stupa in Bengal. This stupa is of Nibedan type. With its Aundo and platform it looks like a bell. Two more stupas built with metals have been found ' one at Paharpur of Naogaon while the other in Jhewari of Chittagong. In a book on Buddhism written in 1015 AD, preserved at the University of Cambridge, there is a picture of Mrigasthapan stupa at the Barendra plains. Possibly, Chinese explorer i-tsing had written about this very stupa in the 7th century AD.

Excavation at Paharpur in the district of Naogaon (previously it was under the greater district of Rajshahi), more specifically at the satyapir bhita, and at Bahulara of Bakura district of West Bengal (India) led to discovery of Nibedan stupas of 10th-12th century AD, which were built with bricks. Most of their parts are ruined now. A good number of small Nibedan stupas were discovered at Shalban Bihar, Kutila Mura (tri-ratna stupa) and Ananda Bihar in the district of Comilla, and at the Basu bihar in the district of Bogra. A number of Nibedan stupas are preserved at the barendra research museum , Bangladesh National Museum, Mahasthangarh Museum and Dinajpur Museum. As those stupas belong to different eras, one differs from the other in terms of shape and building techniques. The platforms of some stupas are round while those of the others are square. In some, the Aundo looks like a bell and the Chhotrabali look like berries put together one on top of other. In the stupas of the later stage, not all the attributes are found in a single one. Through evolution over time, stupa became a symbol of the enightened soul of Buddha and a milestone of Buddhist rituals, which is evident in the Buddhist temples or Pagodas or Kyangs. [Nasrin Akhter]