Uday Shankar (1900-1977) an internationally renowned dance artiste. His father, Pandit Shyam Shankar, came from Jessore district. Uday was born in the city of Udaipur while the Pandit was serving the Maharaja of Jhalawar as his private secretary. Shyam Shankar was a connoisseur of performing arts. To him dance was both art and worship. Uday himself was instinctively inclined to dance and painting. 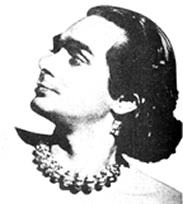 Uday's training at home and abroad and his interactions with the leading contemporary dance artistes of India and Europe equipped him for performance at cross-cultural levels. The great Russian ballerina, Anna Pavlova, engaged him to create two dance items with Hindu themes: Radha-Krishna and the Hindu Marriage.

Uday Shankar's compositions demonstrated his extraordinary imagination, knowledge and perception. The ballet, presented in the Royal Opera House, Covent Garden, with himself as krishna and Pavlova as radha, drew thunderous applause from the huge multi-communal audience. For Pavlova, Uday Shankar also created other ballets based on the Radha-Krishna legend and Ajanta frescoes.

His association with Pavlova inspired him to design modern Indian ballets where movement and costume, theme and decoration, music and song had to be proportioned and blended to fit the modern stage. With Pavlova, Uday performed numerous shows in a coast-to-coast tour of the USA.

Uday Shankar returned to India in 1929 with a new vision. With him came Simone Barbiere, a pianist in Paris, and now a dance partner and disciple of Uday. Together they toured India and presented shows, drawing enchanted audiences everywhere. With him also came Miss Alice Bonner, an influential Swiss sculptress and art historian. With Alice Bonner, Uday Shankar visited all parts of India in search of folk dance and instruments. He was fascinated and inspired by the highly stylized classical forms and varieties of Indian folk dances. He picked up the local Kerala folk dance, Kathakali, and made it popular all over India, particularly in Bengal. With the cooperation of Alice Bonner, he established in Paris a dance and music company called The Compagnie Uday Shankar de Dance Musique Hindous. From 1930 to 1942 his troupe gave 889 performances all over Europe. During this period he also visited America several times with his troupe. His engaging performances brought a new awakening in the Western world about the richness of South Asia's classical folk dances and music.

Uday Shankar was given a hero's welcome when he visited Kolkata in 1937. rabindranath tagore himself came to welcome him. In 1939, with the encouragement of Tagore, Uday established an institute called Shankar India Cultural Centre at Almora, in the foothills of the Himalayas. The gurus whom he invited to work in the Centre with him were Shankaran Nambudirei for Kathakali, Kandappa Pillay for Bharat Natyam, Amobi Singh for Manipuri and Ustad alauddin khan for music. Soon Uday Shankar's Almora Centre became the meeting place for various schools of Indian dance and music. Curiously, the greater part of the funding of the Centre came not from Indians but from Shankar's friends and admirers in Europe and America. This extraneous dependence proved to be ruinous. After four years of operation, the Centre had to be closed down due to lack of funds.

Within the short period of its existence, the Shankar India Cultural Centre produced many great dancers including Guru Dutt, Shanti Bardhan, Simkie, Amala, Narendra Sharma, Prabhat Ganguly, Zohra Segal, Uzra, Sachin Shankar, Mohan Sehgal, Sundari Sridharani, Devilal Samar, and Bhagabhan Das. He also prepared a ballet-film, Kalpana in which he and his wife, Amala, performed the leading roles. The Kalpana, not a hit commercially, reflects the best part of Uday Shankar's dances, his ballets, and his artistic and cultural genius.

Uday Shankar's national and international recognition brought respectability, status and dignity for dance art, which had hitherto been the preserve of traditional dancers called baijis, devadasis, mirasis and nartakis. Shankar made dance in India and in Bengal as respectable as music and theatre.

Uday Shankar finally settled in Kolkata in 1960. He received many honours at home and abroad. In 1971, he was decorated with Padma Vibhushan for his unique contributions to the renaissance of Indian performing art. The Visva-Bharati University conferred on him the Deshikottama in 1975. The Indian Postal Department issued colourful stamps on him and his troupe. Uday Shankar was a compulsive innovator. Drawing on classical and folk dances, he created his own style, which was essentially mystic and transcendental. He blended mythological and modern themes into a new creation suitable to modern taste and sensibility. [Sirajul Islam]