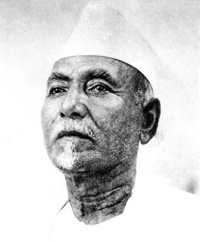 Khan, Ustad Alauddin(1862-1972) musician and sarod expert, was born in the village of Shibpur in the district of brahmanbaria, son of Sabdar Hossain Khan, also a musician. He took his first music lessons from his elder brother, fakir aftabuddin khan.

At the age of ten, Alauddin Khan ran away from home to join a jatra party. His stay with this group exposed him to a variety of folk genres: jari, sari, baul, bhatiyali, kirtan, panchali. Subsequently, he went to Kolkata, where he met a generous physician named Dr Kedarnath, who helped him to become a disciple of Gopal Krishna Bhattacharya, alias Nulo Gopal, a reputed musician of Kolkata. Alauddin became his disciple with a commitment to practice sargam for twelve years.

However, after seven years, when Nulo Gopal died of plague, Alauddin Khan turned to instrumental music. He learned to play many indigenous and foreign musical instruments like sitar, flute, piccolo, mandolin, banjo, etc., from Amritalal Dutt, a cousin of swami vivekananda and the music director of the Star Theatre. At the same time, he learnt to play the violin in the western style from Mr Lobo, a Goanese bandmaster, and in the Indian style from Amar Das, a prominent musician. He also learnt staff notation from the wife of Mr Lobo. He learnt to play sanai, naquara, tiquara and jagajhampa from Hazari Ustad and pakhwaj, mridanga and tabla from Nandababu.

Thus he became an expert in many instruments. He worked as a tabla player under an assumed name for some time in the Minerva Theatre. Then he was invited to perform at the court of Jagat Kishore Acharya, the zamindar of Muktagachha. There Alauddin Khan was attracted to the Sarod after listening to Ustad Ahmed Ali Khan, from whom he subsequently took lessons in the sarod for five years. Alauddin Khan then went to Rampur to take further lessons from Ustad Wazir Khan, a famous musician of the Tansen Gharana in India and the court musician of Hamed Ali Khan, nawab of Rampur. Alauddin mastered the difficult skill of the Sen Gharana. The nawab sent him to the durbar of Maihar Estate in Central Province, where he became the court musician of Brijanath, the Maharaja of Maihar Estate. Alauddin Khan learnt yoga, pranayam and dhyan under the influence of the pir (Muslim saint) of Bareilly.

Alauddin Khan visited different countries as a member of uday shankar's dance troupe in 1935. He was the first Indian musician to acquaint western audiences with the classical music of the Indian subcontinent. He directed the music of Uday Shankar`s classical film, Kalpana, based on dance. Alauddin attained excellence in the sarod and introduced the tune diri diri instead of dara dara in the sarod. He also brought a radical change in the mode of playing the sitar by applying the mode of sarod playing. He introduced a new gharana in the realm of Hindustani classical music, known as the Alauddin Sangeet Gharana or Maihar Sangeet Gharana. He aided the invention of some new musical instruments such as the Chandrasarang and the Surasrbgar. Alaudddin Khan created many ragas such as 'Hemanta', 'Durgeshvari', 'Meghbahar', 'Prabhatkeli', 'Hem-behag', 'Madan-mavjari', 'Mohammad' (Aradhana), 'Manjh' 'Khambaj', 'Dhabalashri', 'Sarasvati', 'Dhankosh', 'Shobhavati', Rajeshri, 'Chandika', 'Dipika', Malaya, 'Kedar Manjh', 'Bhuvaneshvari', etc. Among his disciples are Ustad Ali Akbar Khan, Pundit Ravi Shankar, khadem hossain khan, ustad mir kashem khan, Rawshan Ara Begum, Annapurna, ustad phuljhuri khan, Ustad Khurshid Khan, Ustad Ashish Khan, Ustad Dhyanesh Khan, Pundit Jotin Bhattacharya, Pundit nikhil banerjee, pannalal ghosh, Indranil Bhattacharya, Sharan Rani. He formed an orchestra troupe with indigenous musical instruments and named it 'Maihar String Band'. Alauddin was honoured with the title of 'Khan Saheb' by the British Government. He received the Sangeet Natak Academy Award in 1952, the Padmabhushan in 1958 and the Padmabibhushan in 1971 by government of India. [Mobarak Hossain Khan]